Sarah-Jane Harrison and Aidan McCarthy from the Westminster School of Media, Arts and Design were part of the Olympic Broadcast Service at the Rio Olympic Games. 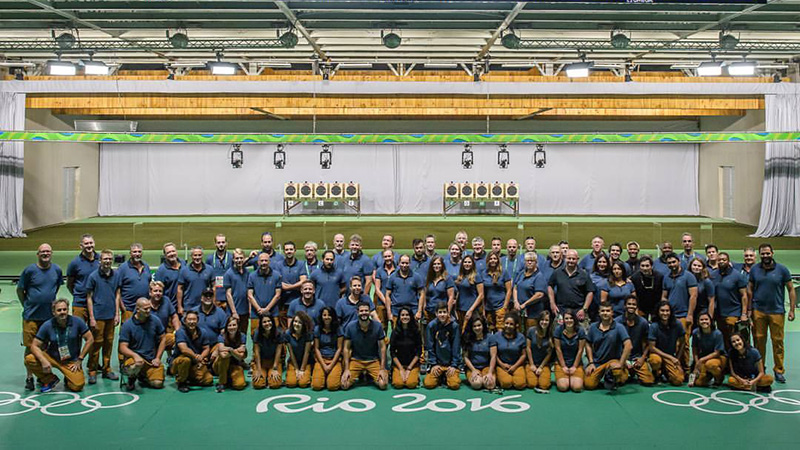 Film Production Technician Sarah-Jane Harrison and Sound Technician Aidan McCarthy worked with the Olympic Broadcast Service (OBS) in London for the 2012 Olympic Games before going out to Rio this year.

In 2012, along with several staff members from the School of Media, Arts and Design, they took part in the Broadcast Training Programmes, run by the OBS across London for local university staff and students to learn about live broadcast.

At the London Olympics Aidan worked as a Commentary Control Room Operator in the largest games venue, the Olympic Stadium, and Sarah-Jane was appointed as a Video Logger on the Table Tennis tournaments and was responsible for logging live feed from the venue to send out to broadcasters.

In 2014 Aidan was contacted by the OBS and invited to work on the Rio 2016 Olympics as a Deputy Commentary Manager on the Mountain Biking and Shooting Range events. Sarah-Jane again joined the archive team, this time as an Ingest Operator, making clips of each interview in every venue across the Games, checking them for quality before sending the clips out to broadcasters.

Speaking about his experience Aidan said: “There is no other sporting event like the Olympics Games on the planet and to be working alongside the world’s best athletes is simply a privilege.

“The highlight for me had to be reconnecting and working side by side with so many graduates from the courses that I teach on. To witness their transition from academia into professional work life is fantastic. It so inspiring to witness them putting theory into practice.”

For Sarah-Jane the highlights were having time off in Brazil to see the sights of Rio and working with the locals. Speaking about her experience she said: “For many of my local Brazilian colleagues this was their first job as they were still studying. They were so happy to have the opportunity to work for the Olympics and meet so many different people from around the world and were so keen to take us out and show us places.

“Working in a job like that takes a lot of concentration and attention to detail can be tough when the hours are long, there’s not always a lot going on, and then suddenly everything happens at once!”

,
Aidan McCarthy and colleagues at the Rio Olympics
,

Both Sarah-Jane and Aidan offered advice to aspiring broadcasters. Sarah-Jane said: “Take full advantage of opportunities that come your way even if they don’t fit into the ‘plan’ of what area of work you thought you would be doing. I was always heading towards working on Films but since doing well at the London Olympics have worked mainly in television on documentaries which also gave me the credits needed to be asked back to the Rio Games. It was an unbelievable opportunity and such a great experience.”

Aidan said: “Make sure to stick to what you are passionate about and what you find enjoyable and fun.

“More than anything you need a strong desire and passion to work in live broadcasting. Listening and being present along with the ability to make a great cup of tea or have a sociable drink with colleagues after the job is complete will always keep you in the minds of those who do the hiring. Working on the Olympics offers so many opportunities for learning new skills and working with the very latest technology – for me it affirmed why I love doing what I do.”