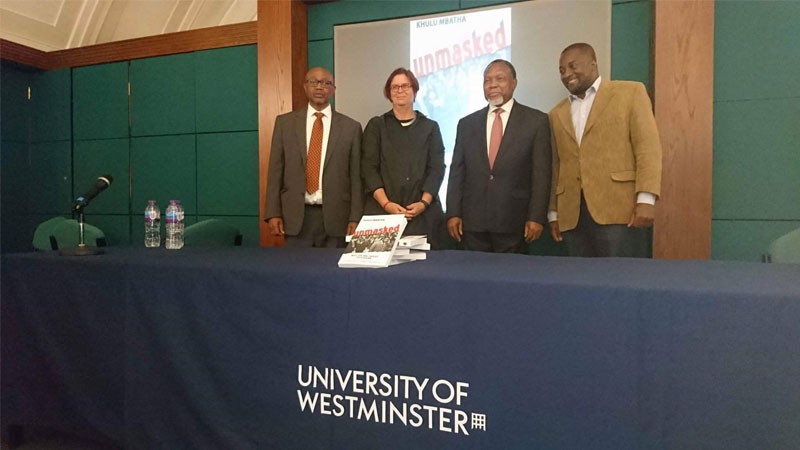 The event, organised by Westminster’s Africa Media Centre, in collaboration with the South African Business Abroad (SABA), marked the launching of the book, Unmasked: Why The ANC Failed to Govern. Dr Mbatha is a veteran of the South African anti-apartheid movement African National Congress, which was led by Nobel Peace Prize winner Nelson Mandela.

In her welcoming remarks, Professor Kerstin Mey, Pro-Vice Chancellor and Dean of the School of Media, Arts and Design, mentioned that the University was pleased to play host to the distinguished former Head of State.

Speaking about the theme of the book, President Motlanthe said: ‘’If the ANC is to now lead the South Africa society forward, its has to undergo a surgical overhaul in order to give expression to the fact the struggle it waged over the years was in the name of and on behalf of the people.’’

The author, who served as Special Advisor to President Motlanthe, said he was honored to be invited to launch his book in the University. ‘’During my years of exile in the 1970s and 1980s, the British Anti-apartheid Movement, told me many positive things about what was known as the Royal Polytechnic Institute. I am humbled to be here."

Dr Winston Mano, Director of the Africa Media Centre at the University of Westminster, who organised the conference, said: ‘’I think the ANC comrades were clear and honest in their assessment of the multiple challenges faced by their party in the ongoing transformation of their society’.’

The event, which was chaired by the Director of International Relations, included a presentation followed by a questions and answers session on the role played by the ANC in South Africa’s political socio-economic transformation since 1994.

The book offers a critical historical assessment of the current internal challenges faced by the ruling African National Congress party of South Africa, which affects its ability to run the country effectively.

Find out more about other events and conferences organised by the Africa Media Centre at the University of Westminster.