Over 2800 University of Westminster students who have completed their degrees graduated at the iconic Royal Festival Hall on London’s Southbank. 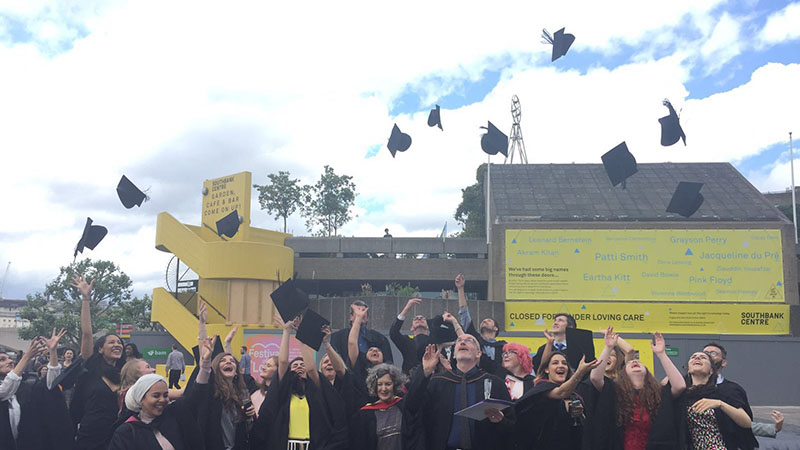 The graduation ceremonies span three days, beginning on 11 July with students from the School of Media, Arts and Design. Along with their peers, the students shared the stage with the School’s Honorary Doctorates Jon Snow and Sandi Toksvig OBE. Both delivered inspirational speeches to the graduates with Jon Snow saying: "We are at a crossroads in political life. You need to come together and change the world." Echoing the statement, Sandi Toksvig urged students to "grab life by the throat".

Also graduating on 11 July were students from the Faculty of Science and Technology who were treated to an uplifting speech from psychologist and Honorary Doctor of Science Susie Orbach. Students shared their delight, with Erika graduating with a BSc in Human Nutrition tweeting "Thanks @UniWestminster & @uw_fst, these 3yrs were amazing! #westminstergrad" and journalism graduate Alice Marshall celebrating her first saying:  "Graduated with a first class honours from the @UniWestminster! It's been an incredible and inspiring three years."

The final ceremony was hosted on 13 July, for students from the Faculty of Social Sciences and Humanities where Baroness Doreen Lawrence OBE, who received an Honorary Doctor of Letters, joined students.

After the ceremonies, the students and nearly 10,000 guests were treated to a drinks reception in the Royal Festival Hall.

From everyone at the University of Westminster, we want to congratulate all of our graduates, and we wish them the best of luck for the future.