Film and TV receives Awards and Accolades in London, Manchester and Munich

A team of BA Film and TV Production students rounded off a memorable 2009 by winning ‘Best Live Action Film’ at the prestigious Exposures: New Talent in Moving Image Festival in Manchester in November and ‘Best Short’ at the London Young Film Festival for filmmakers under 26. 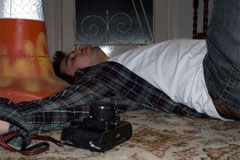 Over 300 films were entered for the three day Exposures festival, 40 were selected for screening and Westminster’s entries were first and second in the competition. ‘Prick’, directed by Ryan Vernava, written by Richard Manders and produced by Krystian Jones, is a drama about contemporary youth culture, following a protagonist who is forced, as the film develops, to confront the consequences of his actions. ‘Tears of the Son’, produced by Emma Schofield and written by Tom Coldrick received an honourable mention’ as the runner up.

‘Tears of the Son’ was also selected in competition at the Munich International Festival of Film Schools in November, and its director, Dean Threadgold, was invited to attend the week-long festival. He found it “a fantastic opportunity to network with like-minded filmmakers from around the world.” Peter Hort, Course Leader for BA Film and Television Production, commented that “our students have set the bar very high this year, and the challenge is to make sure that we can continue to offer an environment where they can be both creative and professional."