Her Royal Highness the Duchess of Cornwall visited the Brontë Parsonage Museum, where she contributed to the newly created manuscript of the novel Wuthering Heights by re-writing the last sentence. She also met with Research Fellow Clare Twomey, who initiated the project. 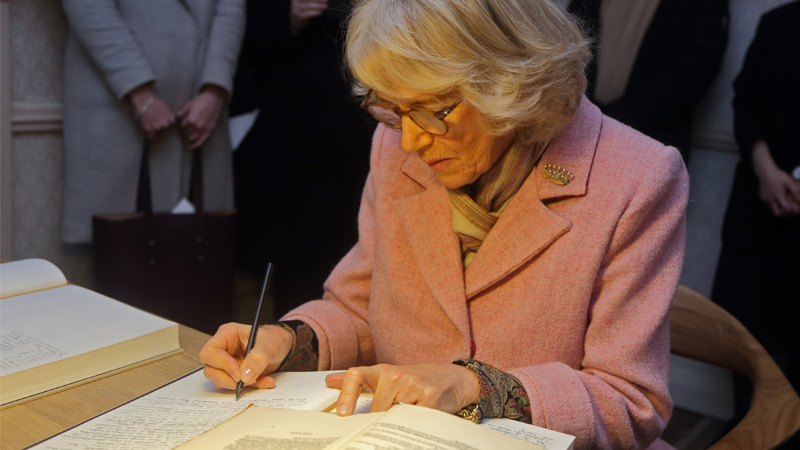 Her Royal Highness visited the Brontë Parsonage Museum in Haworth, which reopened recently following a period of conservation work and preparations for the bicentenary of Emily Brontë. This year marks the 90th anniversary of the Museum in Haworth Parsonage, the house where the Brontës spent most of their lives and wrote their great novels.

During 2017, over 10,000 visitors participated in Clare Twomey’s Wuthering Heights – A Manuscript project, which set out to create a new version of Emily Brontë’s long-lost manuscript by copying it out one line at a time.

Her Royal Highness met Clare Twomey during her visit before writing the last line of Wuthering Heights into the newly created manuscript in the very house where Emily wrote the original.

During her visit, Her Royal Highness was guided through the historic rooms of the Parsonage by Principal Curator, Ann Dinsdale and had a close-up viewing of some of the ‘treasures’ relating to Emily Brontë in the museum library.

The visit also involved a private reception where Her Royal Highness met museum staff and volunteers and local school children who recently took part in a creative writing competition organised by the Museum.

Kitty Wright, Executive Director of The Brontë Society, said: “It will be an immense honour to welcome Her Royal Highness The Duchess of Cornwall to the Museum and we are looking forward to sharing our world-class collection with her. All the staff are looking forward to the visit and we can think of no better start to Emily Brontë’s bicentenary celebrations.”

Clare Twomey is a London-based artist and Research Fellow at the University of Westminster, where she directs Ceramics Research in the Centre for Research and Education in Arts and Media (CREAM). Her work often involves intense research, focusing on themes such as collaboration in fabrication.