Two drawings by former students John Cook and Ben Pollock from Design Studio 18 will feature at international conferences and exhibitions in Michigan, USA and Toronto, Canada in September and October. 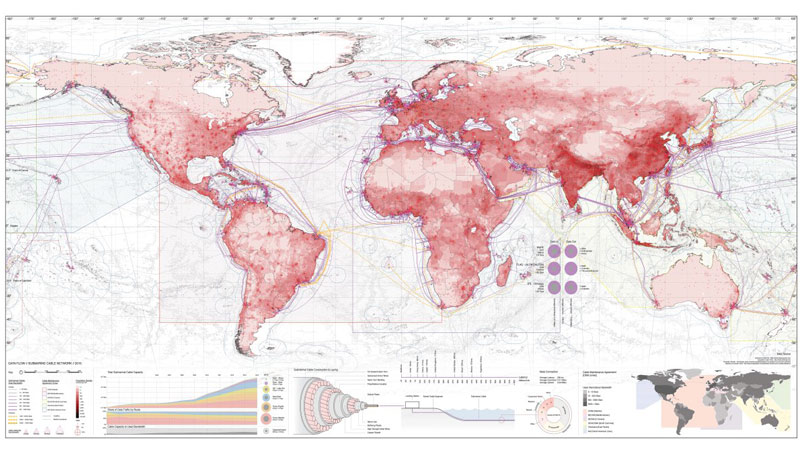 The first drawing, named ‘Global Flows’, was produced by Ben Pollock, a graduate from the Master of Architecture (MArch) (RIBA Pt II) course for DS18 in the 2015/16 academic year when the studio worked in the Maldives focusing on ‘Designing with Emergent Energies in a Fluid Archipelago’. The DS18 project required students to map an entity – an item, commodity, practice, product, technology or service  – from the scale of the globe to the scale of where it enters, circulates, and impacts on human and non-human life in the Maldives.

The drawing will be exhibited as part of EDIT: Expo for Design, Innovation and Technology, a 10-day festival taking place in Toronto from 28 September to 8 October 2017. EDIT is produced by Design Exchange, Canada’s Design Museum, in partnership with the United Nations Development Programme (UNDP), taking the UNDP’s 17 Global Goals for Sustainable Development as its framework.

The second drawing, ‘CSP Plant Jupiter Overview 3000,’ was produced by John Cook, also a graduate from the Master of Architecture (MArch) (RIBA Pt II) course for his project ‘Camdeboo Solar Estate’ for DS18 in the 2014/15 academic year, when the studio worked in South Africa focusing on ‘Designing with Energy, Fracking the Karoo’.

It will be shown at Ambiguous Territory: Architecture, Landscape, and the Postnatural, an exhibition and symposium that situates contemporary discourses and practices of architecture and landscape within the context of the Postnatural; the era of climate change, the Anthropocene, and altered ecologies. This will take place at the University of Michigan’s Taubman School of Architecture and Urban Planning from 25 September to 19 October 2017.

DS18 is a studio taught by Lindsay Bremner and Roberto Bottazzi in the Master of Architecture (MArch) (RIBA Pt II)  programme at the University of Westminster.