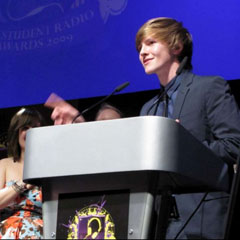 The awards were presented to the Smoke Radio team at a ceremony on Tuesday 24 November.

"This is a fantastic achievement for our station as these categories involve not just radio students, but students from many other areas of the University too, which shows just how inclusive Smoke Radio can be,” said Matthew Linfoot, director of undergraduate media studies at the University.

“We'd also like to thank staff and the Student Union for their continued support of the station which helps make awards like this possible".

The Student Radio Awards sees student radio stations from across the country pit themselves against each other in 14 categories.  Smoke Radio was nominated for four awards and took home two.

The entry for Best Live Event concentrated on 'Smoke's Out for Summer' - an annual week long series of broadcasts to mark the end of the academic year. This year the team broadcast live shows from all four University sites - including the new radio studio at New Cavendish Street and the foyer of Regents Street during the Journalism in Crisis Conference. The week culminated with an afternoon of music broadcasts from the Undercroft Bar at Harrow, featuring live bands.

Visit the Smoke Radio website to find out more.