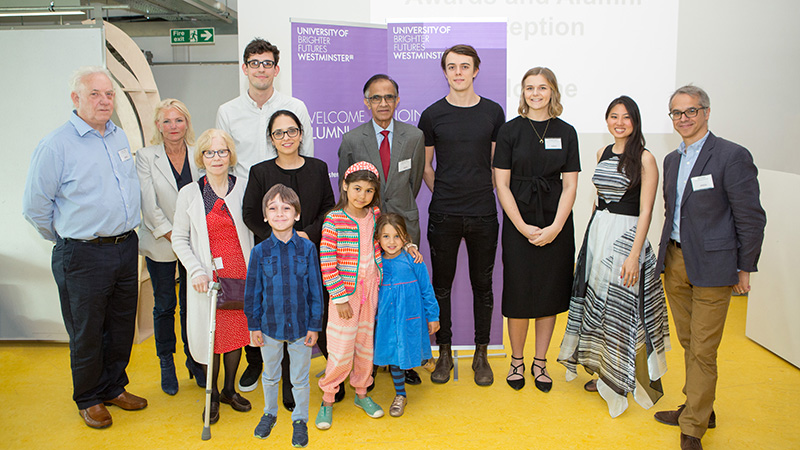 The awards celebrated the achievements of the talented pupils from Architecture, Interior Architecture and Architectural Technology courses.

Many of the awards have been made possible by generous alumni and supporters of the University who have set up prizes for students to recognise their commitment and talent. This invaluable support is set to continue with several donors pledging to renew their support for future prizes.

The James Phillips Architectural Travel Prize was awarded to Richard Morrison, Master of Architecture, which recognises an outstanding piece of coursework and will enable him to travel abroad to take photographs of architecture and public spaces. The prize was set up in memory of James Phillips, a partner at Make Architects and an enrolled student on the Part 3 Architecture degree who sadly passed away before he was due to start the course in 2014. James’ parents and Trustees of The James Phillips Foundation, Graham and Diane Phillips, were in attendance at the event, and have generously pledged to renew their support of the prize.

The Shoaib Rawat Mahmad Prize, set up in memory of Shoaib, a student on the RIBA Part III and an ambitious and talented architect who sadly died in 2008, has again been generously funded for the ninth year in a row. This year the prizes were awarded to Sijia Cai, Tom Kendrew and Samantha Wilson for the three best design projects on the Architecture MA.

Other awards included the DETAIL magazine award, which provides recipients with a free one-year subscription to this highly influential architectural publication. It was won by Lucy Bambury, Ella Daley, Wangyang Liu, Zoe Arnold and Larisa Tsydenova.

Chris Smith, Director of Development and Alumni Relations, said: “I am delighted that our alumni and friends continue to provide this kind of support to our students. These prizes provide a well-deserved reward for students who have excelled on their course, and will motivate them as they take their first steps in their careers. I’d like to give my heartfelt thanks to our generous donors who have pledged to continue their support for these awards in the future.”

VOLA prize winner, Costanza Cerioni and her parents showing off her winning work

Guests of the award ceremony, held on Friday 15 June, had the opportunity to explore the studio exhibition which features works and models created by students across both undergraduate and postgraduate Architecture courses in the company of students, alumni and supporters of the University.

OPEN 2018, the Department of Architecture’s end of year exhibition of student work, continues daily for public entry until Sunday 8 July at the University’s Marylebone campus.

Find out more about studying Architecture at the University of Westminster.