What better way to launch the Law School’s new lecture theatre than an address by one of the Faculty’s most noted alumni? 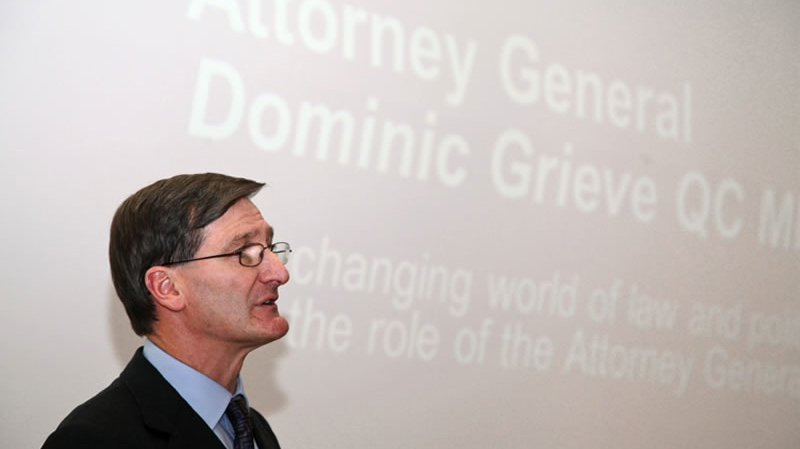 When the Rt Hon Dominic Grieve QC, the Attorney General (AG), stepped onto the podium the result was a thought provoking, entertaining and educational evening. His lecture on ‘The Changing World of Law and Politics and the Role of the Attorney General’ saw many reflections and also elicited some probing questions.

Dominic Grieve, the MP for Beaconsfield, studied law at the University, then named the Polytechnic of Central London, graduating in 1979. “I thank the polytechnic for getting me started in law, although my abiding memory of the first year of the course was having to work harder than I would have wished,” he joked.

On being Attorney General

“Undoubtedly, my role as Attorney General is a very odd one, deliberately placed in its own distinctive niche. Short of being Prime Minister, there is hardly a job in government where you have the opportunity to see more papers.”

“The core of my work is advising government on issues of law – Constitutional, European, International, Human Rights.” He is also able to bring proceedings for contempt of court, refer lenient sentences to the court of appeal (as in the Stuart Hall case), intervene to protect charities and get involved in all litigation concerning the government.

“Short of being Prime Minister, there is hardly a job in government where you have the opportunity to see more papers. I am the only government minister to see the last government’s papers, so that was fun. I am also the only person who has to ask the Queen’s permission to go on holiday - or abroad for that matter.”

The legal profession has changed enormously since he was called to the bar in 1980. “Then, chambers had a mix of work," he stated. “Today, specialisation is seen as much more important and essential if you want to get on. These are difficult times when law firms and barrister chambers are not recruiting in the numbers they used to,” he told the audience, before going on to advise students that they needed to be extremely single-minded about what they want to achieve.

Students should talk to others, he added, to decide on the right chambers, as well as do as many placements and pupillages as they can. “As the economy strengthens, so the opportunities increase.”

He also suggested students could make a valuable contribution by working in one of the government’s legal departments, which should not be considered a backwater but rather, as cutting edge.

The son of a politician, he grew up at a time when “the country was in danger of collapse – industrial strikes, power cuts and the intervention of the International Monetary Fund." Today, he feels, the danger would appear to be cynicism – the lack of trust in politicians who fail to fulfil their promises or manifestos.

“In my mailbag I get a strong sense of alienation…there’s a belief that voting hardly matters any more. The (Parliamentary) process does depend entirely on the willingness of the active citizen to participate and that underpins this country and that means all of you,” he finished.