The University of Westminster’s College of Design, Creative and Digital Industries was invited to take part in Alexandra Palace summer festival ‘The Great Fete’ on Saturday 18 August to publicly showcase their collaborative pilot digital transformation projects. 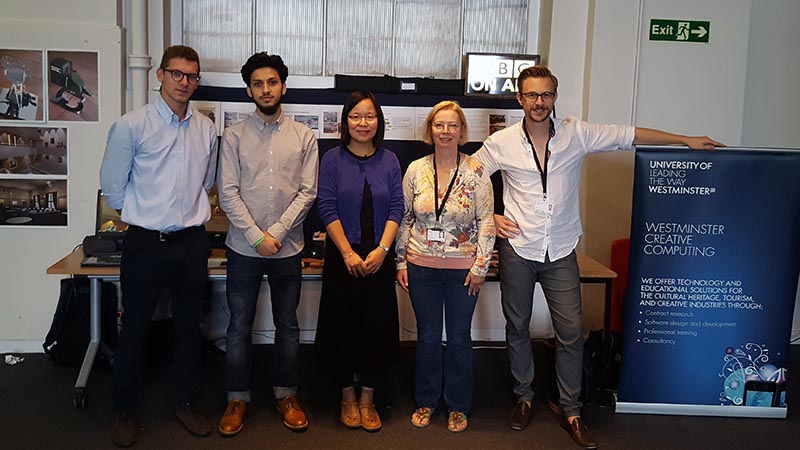 The hands-on demonstration prototypes that were created exploited the immersiveness of VR/AR. These included ‘Step Back in Time’, a mobile VR-based interactive tour app of historic BBC studios that takes visitors back to 1930, and ‘Digital 3D Popping up’, a mobile interactive AR application showcasing in 3D historical equipment kept at BBC 1935 studio at Alexandra Palace.

The collaborative project provided fresh perspectives and windows onto inaccessible histories, spaces and collections. It was made out of practical exercises, examples and case studies that elaborate on digital transformation, increasing relevance and public engagement and impacts and sustainability of symbiotic relationships created. The University of Westminster’s College of Design, Creative and Digital Industries table was one of the most popular areas in the fete and had a huge number of visitors in different age groups.

Talking about this project, Senior Lecturer Dr Li Jin, who set up the partnership, said: "We encourage our students to develop their abilities of grasping experience and transforming knowledge via this collaboration, appreciating the need for interdisciplinary approaches using digital creative technology."

Read more about the New Tech for Old Stories project.

Find out more about the Computer Science BSc offered at the University of Westminster.

Find out more about the College of Design, Creative and Digital Industries.