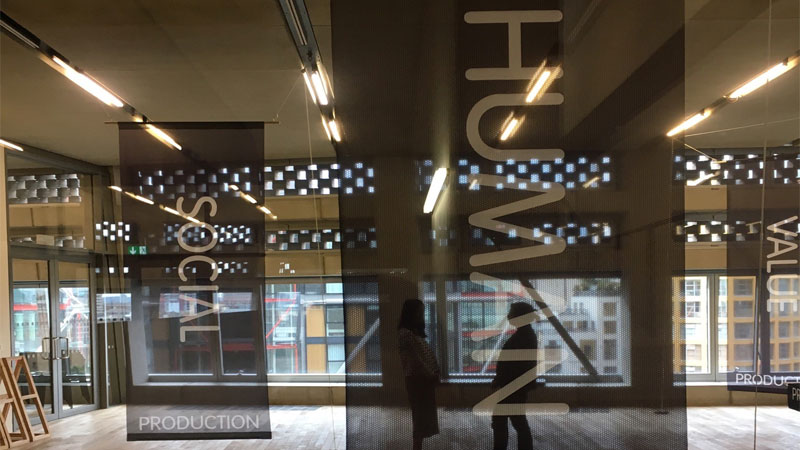 Twomey was the Lead Artist for the second season of Tate Exchange and explored the theme of ‘Production’.

After living out the actions of community production with the public during her first exhibited work ‘FACTORY: The Seen and the Unseen’ at Tate Exchange, she finished the year with a reflective work. Her project took many of the words gained from the participants and placed them as the basis for making 12 large banners in two days to mark the close of the year of Production at the Tate.

This two-day event drew the public into a conversation about how we connect to our everyday ideas of production, labour, value and exchange. The 12 large fabric banners transformed the space into a place for dialogues around ideas of Production.

Words were added to the banners by the public over the two days to form a lasting record of their collective understanding of production in 2018.

The banners will also shortly be displayed by 12 groups across the UK creating a lasting record of a public understanding of production ideas.

Besides being a Research Professor at the University of Westminster, where she directs the Ceramics Research in The Centre for Research and Education in Arts and Media (CREAM), Clare Twomey is an artist and curator whose work often involves research focusing on themes such as collaboration and fabrication.

Her work studies the realms of performance, serial production, and transience - often involving site-specific installations. She has worked with the Foundling Museum, the Victoria and Albert Museum and has presented commissions in the USA, Korea, Holland, Canada, Japan and Italy.

In speaking about her project, Professor Clare Twomey said: “The final part of this year’s role as lead artist was to leave a lasting legacy for the works of participation that have been undertaken at Tate Exchange. This is one of our greatest challenges in participatory practice, to understand its legacy.”

Find out more about the Centre for Research and Education in Arts and Media (CREAM) at the University of Westminster.