The Chevening South Asia Journalism Programme fellows hosted a symposium at the Institute for Government to mark the end of their eight-week programme at the university. 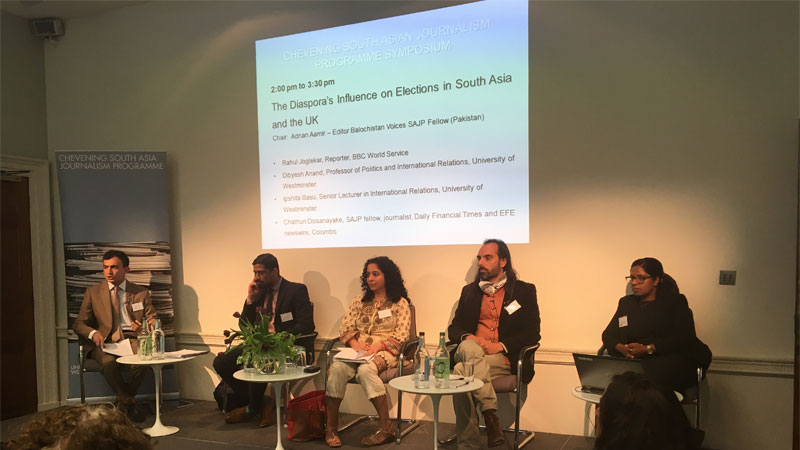 The 2018 Chevening South Asia Journalism Programme, which launched on Saturday 24 March, hosted 17 journalists from Bangladesh, India, Sri Lanka, Pakistan and the Maldives enabling them to deepen their understanding of the role of the media in a changing world, as well as well as exposing them to the best of British media practices, institutions, art, culture and civic voices.

On Wednesday 16 May, the programme culminated in a symposium, which the participants organised and hosted at the Institute for Government, inviting high profile speakers to discuss challenges of the day with an audience of journalists, government ministers, academics and think tankers from across the UK.

The symposium was an opportunity for Chevening participants to open up topics they have explored over the last eight-weeks to a wider audience and to engage in discussion with experts they admire.

Among high profile speakers were Head of News and Current Affairs for Channel 4 Dorothy Byrne, Chief Foreign Affairs Commentator for the Financial Times Gideon Rachman, and Jamie Bartlett, Author, Tech Blogger and Director of the Centre for Analysis of Social Media at Demos.

The symposium, entitled ‘South Asia Decides: Upcoming Elections and the Media’, focused on the institutions and values that are needed to make electoral choices effective a few months ahead of the general elections across South Asia. Participants explored the role of the media in ensuring better and more meaningful democracy and discussed the pressing issues that confront the fellows’ home countries ahead of the elections.

Speaking about the event, a Chevening fellow from Pakistan, Gonila Hasnain, said: "It was an amazing day at the Institute for Government where the Chevening fellows led on organising pertinent and fascinating discussions on issues of relevance of to our region. We were delighted to have managed to get such a wide range of high-level speakers, and the session I enjoyed the most focused on targeted fake news, where Jamie Bartlett spoke about his new book."

Another Chevening fellow, Mohamed Nasih from Maldives, said about the symposium: "For an event that we organised in the last eight weeks, we had a tremendous number and range of attendees, from the Foreign Office to an editor of the Economist. The highlight of the day for me was hearing the media landscape of Maldives discussed at this international forum."

Chevening fellow from India, Sanjay Mishra, added: “The symposium was a triumph for me most of all because Pakistanis and Indians organised it together – a shining example of what is possible if we could meet more, and talk more.”

The programme, which is now in its sixth year, is run by Professors Jean Seaton and Rosie Thomas and is funded by the Foreign and Commonwealth Office’s Chevening fellowships initiative.