The Chevening South Asia Journalism Fellowship Programme for 2018-2019 at the University of Westminster, designed for promising journalists from South Asia, is now opening the application window until 27 September for a March 2018 start. 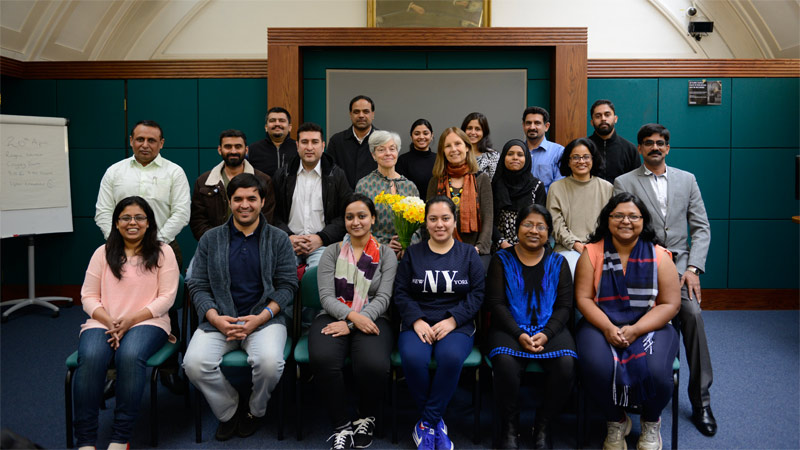 Westminster Professor Jean Seaton and Professor Rosie Thomas run the Chevening South Asia Journalism Programme the Westminster since 2012. In 2016 they won a prestigious contract from the UK Foreign Office to extend the programme to include other countries across the region. For the first time it opened to journalists from Bangladesh, Sri Lanka and the Maldives, posing an exciting challenge to bring together participants from multiple societies with the different traditions and histories.

The last Programme, which took place this spring at the University of Westminster, invited seven participants from Pakistan, India, Sri Lanka, Bangladesh and the Maldives for an eight week course aimed at helping them sharpen their leadership and practical skills in journalism and broaden their networks through interactions with leading UK academics and journalists.

The programme, as part of The UK’s Chevening Scholarship Programme funded by the UK Foreign Office, provides an informed and evidence-based context to key policy debates and mutual understanding of international positions, supply practical experience and encourage dialogue on key issues.

Chevening, founded in 1983, is the British government’s international award scheme aimed at developing global leaders. Funded by the Foreign and Commonwealth Office and partner organisations, Chevening offers two types of awards – Chevening Scholarships and Chevening Fellowships – the recipients of which are personally selected by British Embassies and High Commissions around the world through a rigorous selection process.

Speaking ahead of the formal launch on 9 August, British High Commissioner to India Dominic Asquith said: “Those selected for the Chevening programme will join a global network of influencers and leaders. Not only do scholars receive a first-rate British education that will enhance their careers, they also join the living bridge of people and ideas between the UK and India, strengthening our mutual understanding and friendship.”

Professor Jean Seaton, Co-Director of the Programme, said: “This is one of the most engaging projects we have been involved with. It uses London and the intellectual and cultural and political resources (and problems) of the UK to help Indian, Pakistani and Sri Lankan and Bangladeshi senior journalists think through the challenges they face. Professor Thomas and I work together to create new ways of challenging the marvellous scholars and ourselves.”

Find out more about the Chevening Scholarships Programmes.