BLAIR AT WARPHOTOGRAPHS BY
NICK DANZIGER 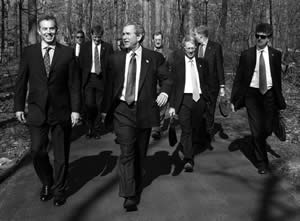 London  Gallery West is delighted to present this timely exhibition of  photographs by award-winning photojournalist Nick Danziger: Previously  shown at the National Portrait Gallery, Danziger’s portraits illustrate  a critical moment in British political history as Tony Blair took the  final steps towards leading the nation to war with Iraq.

In  March 2003, together with Times Literary Supplement Editor Peter  Stothard, Danziger was given thirty days of unprecedented access to the  Prime Minister and the inner circle of political players in Downing  Street, at Camp David and in Europe. The resulting images provide a  rare insight into the Blair’s hopes and fears as he faced a sceptical  electorate, a divided party, other world leaders and ultimately Saddam  Hussein.

The exhibition gains extra poignancy today in the  context of the current inquiry charged with identifying lessons from  the tangled processes that led to the Iraq war. Danziger’s portraits,  displayed alongside captions by Stothard, remind us of ‘Blair at War’.  Sandy Nairne, Director of the National Portrait Gallery, London said:  ‘Danziger’s closely observed portraits of Tony Blair take us to the  heart of statesmanship: to the interaction between world leaders at a  critical moment.’

Nick Danziger is one of the world’s most  renowned photojournalists and documentary-makers. His photographs have  been published and exhibited internationally, and are held in numerous  collections including the National Portrait Gallery (London), the  National Media Museum (Bradford) and the Gallery of Modern Art  (Glasgow). His is also the author of several best-selling travel  diaries. His many prestigious awards include a World Press Photo 1st  Prize (2004) and the Prix Italia for Best Television Documentary  (1991). He is an Honorary Fellow of the Royal Photographic Society, and  in 1996 was nominated for Journalist of The Year by the Royal  Television Society. Recent projects include a study of the impact of  armed conflict on women, and travel to eight of the world’s poorest  countries to document progress being made by the UN towards eradicating  poverty by 2015.

Gallery  Talk: Colin Jacobson, Senior Lecturer in Photojournalism, will discuss  the relationship between photographers and politicians in the age of  the spin doctor.