Hannah Gelbart, BBC Social Video Producer, presented a talk at the University of Westminster organised by the Digital and Interactive Storytelling LAB MA (disLAB) and shared the best practices of being a professional social media producer today. 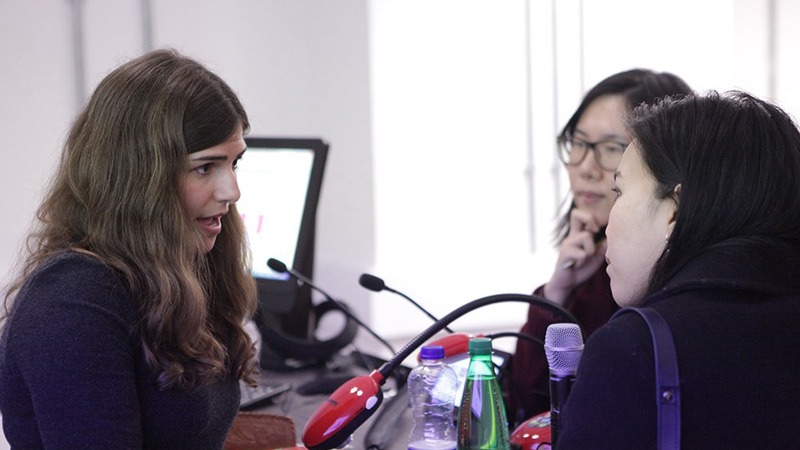 The disLAB is led by University of Westminster Senior Lecturers Sandra Gaudenzi, Massimiliano Fusari and David Dunkley Gyimah. Together they combine industry experience with PhD academic rigour and teaching expertise on their course. They organise a monthly series of talks called disLABPresents to create a conversation between students, young media professionals and industry practitioners and to explore story forms and emerging convergence styles.

Hannah started her career at the BBC by completing the Journalism Trainee Scheme and is now publishing news videos for BBC News Online and social platforms. She explained that analytics show that videos have less than ten seconds to attract an audience.

She advised the students to focus on the emotions of the video by cutting out the journalist and graphic visuals. She added that there are differences in the framing of interviews — the ones that work best are often framed direct to camera. Also the productions maximise the use of music and mandatory text for mobile watchers on-the-go.

Her normal day at the BBC includes browsing the net looking for stories that can be reworked and developed further. She has six hours until the video story has to be published on Facebook. Then it is reworked as a vertical video for mobile devices and other platforms where necessary.

The next disLABPresents on 27 March will feature Juliana Ruhfus, an award-winning journalist and senior reporter at Al Jazeera, and will discuss ‘How can we use digital games to deliver hard news?’

Register for a ticket here.