BBC2: Six robots and us

Professor Izzet Kale, Marco Ivan Ramirez Sosa Moran, Ivan Beretta and Zeena Radwan have been involved in the production of BBC 2’s prime time programme Six Robots and Us. The programme features the University’s Nao robot which was given the fantasy name TutorBot. 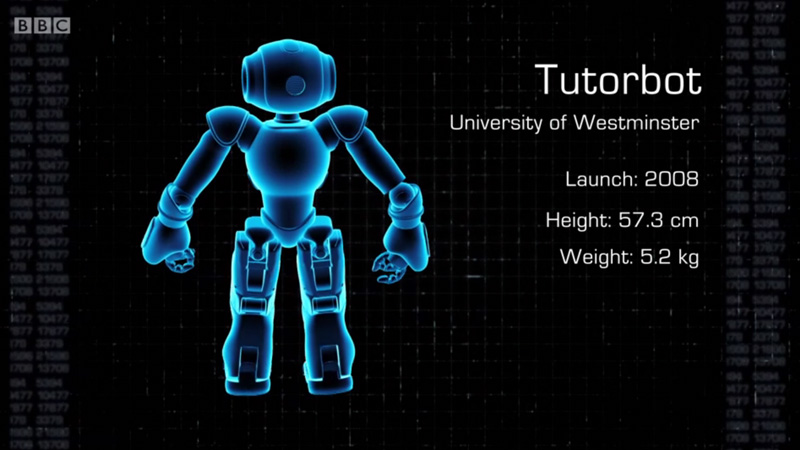 In a pioneering scientific experiment BBC 2 partnered with Britian’s leading robotics laboratories, including the University of Westminster, to put the latest cutting edge social robots into the homes and workplaces of British people.

The BBC 2 production team worked with six households across Britain who opened their doors to a robot for up to three weeks and evaluated the robots’ effectiveness. Each household had a genuine need and was introduced to a robot that had been specifically programmed for them. They returned to film with each family four times across the research period to see how they were getting on with the new addition to their household.

Single mum Amanda and her six children from Blackburn were assigned the University of Westminster’s TutorBot programmed and managed by the Westminster team. It has been programmed with algorithms to help Amanda’s son Isaac with pronunciation, as Isaac has a rare form of dwarfism and a learning delay. It tried to help Isaac improve his speech.

For example, TutorBot played word games with the boy: “What do you find in a pencil case? Aeroplane, castle, pencil.”, giving three options to choose from. Saying the correct answer was acknowledged and praised.

At the end of the experiment, Amanda said: “His [Isaac’s] speech has definitely improved. It’s clearer. He’s got more words than before. He has got more to say. It’s like he got more confident with his speech. I feel a lot more hopeful that in the future he is going to catch up with everyone else.”

Watch Six Robots and Us on BBC iPlayer.