The University of Westminster’s Bass Culture research project, which will explore the history of Jamaican music’s contribution to the culture and heritage of Britain, has been launched at the University’s Regent Street Cinema on 29 September, with Linton Kwesi Johnson, Dennis Bovell and Daniel Rachel among the speakers who praised the project. 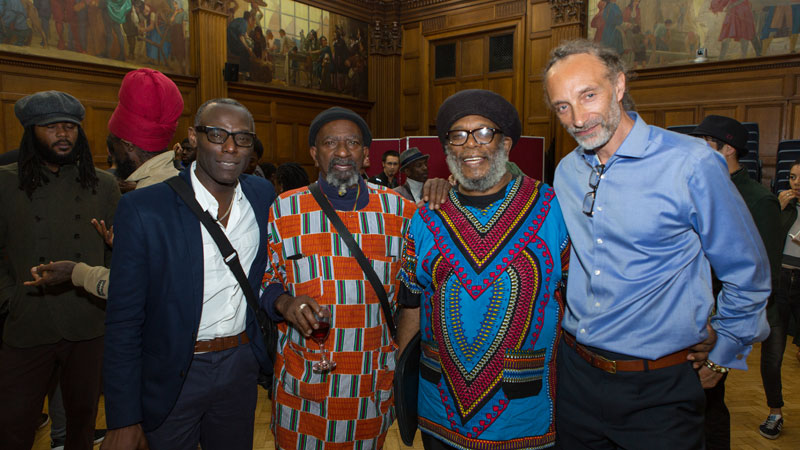 Lead researcher Mykaell Riley opened the night giving a speech about the importance of Jamaican music and the influence it had on British music and culture, which has never been recognised in such an extensive research study before. The University secured one of the biggest research awards of £533,033 from the Arts and Humanities Research Council (AHRC), and the work will be conducted in partnership with the British Library, British Library Sound Archive and Black Cultural Archives.

The Bass Culture research project, named to reflect the dominant role of the bass frequency within Jamaican music, will be the first in-depth retrospective of Jamaican and British music in the UK. The project, which will run until January 2019, is a positive response to the disengagement and lack of awareness surrounding the heritage and impact of Jamaican and Jamaican-influenced music in Britain over the last six decades.

Riley, a Senior Lecturer in Music, Film and Communication at the University of Westminster, discussed the obstacles he had to overcome for this research project to come to life, and thanked his fellow members of staff for their support and determination during the process.

Riley said: “We are at a beginning of an exciting journey and we have the right people so we should make the journey.”

Black music luminaries including Jazzie B and Dennis Bovell were present and many great speakers came to support Professor Riley. Poet Linton Kwesi Johnson, Paul Reid of the Black Cultural Archives, Teddy Nygh of Fully Focused and author Daniel Rachel all took to the stage to show their excitement at the launch of the project.

Linton Kwesi Johnson read from a poem from his collection Tings An’ Times, inspired by Jamaican music and its beat. Dennis Bovell shared his own experience of the Black British music industry, its development, and reaching the top of the charts.

Fully Focused’s Co-Founder Teddy Nygh brought a group of young people onstage to talk about their participation in the project as young filmmakers and Paul Reid, director of the Black Cultural Archives, told the audience how the project would reinforce the importance of Black British heritage in Britain, and underlined archiving as one of the key components of the project.

Daniel Rachel then spoke of his interest in Jamaican music and the strong influence it had on him since a young age. It influenced his book Walls Come Tumbling that explores a pivotal period between 1976 and 1982 when politics and music came face to face with the Rock Against Racism campaign. He said: “I heard the rich heritage of Jamaica and once you hear that music it never leaves you.”

The University of Westminster showed its support and excitement for the Bass Culture project with Roland Dannreuther, Deputy Vice-Chancellor, and Gillian Youngs, Head of Innovation and Impact for the Westminster School of Media, Arts and Design, both giving speeches about University’s celebration of diversity.

Professor Roland Dannreuther said: “This project reflects the rich tradition of this university that has always celebrated diversity, multiculturalism, and building a pluralistic and tolerant community. We are one of the most international and diverse universities with strong roots in the Black and Minority ethnic communities. This is especially the case with Music which has always had the tradition of reaching out to those from disadvantaged and BME backgrounds, and has had noted successes in nurturing successive generations of music students to take leading roles in the music industry.”