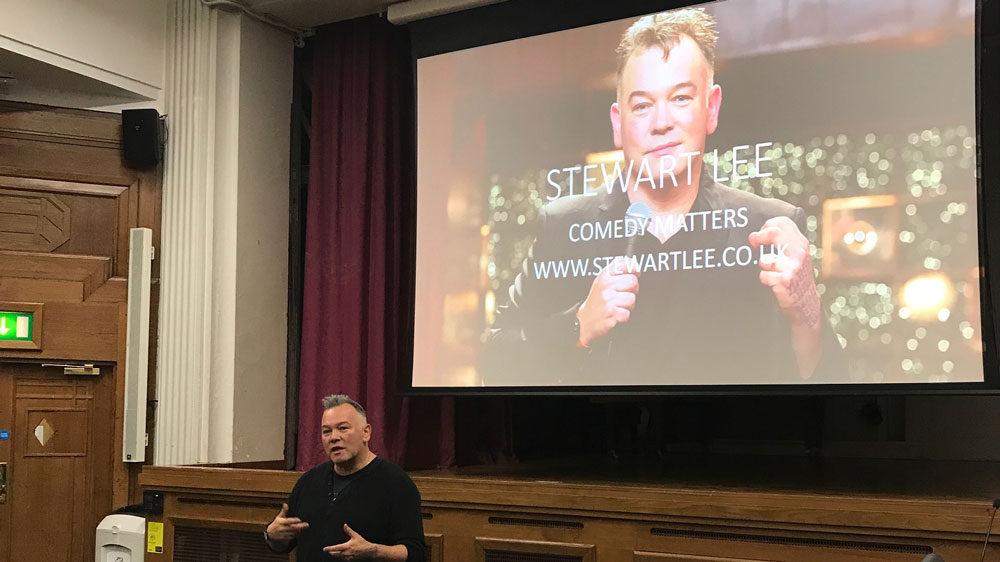 Stewart Lee spoke on the theme of Comedy Matters and a large number of students on the Entertainment Law LLM, as well as students from English Creative Writing BAs, attended.

Stewart gave a wide-ranging and revealing talk, with insights into some key highlights and events during his personal journey in the world of comedy during the late 1980s and early 1990s. This included the critical acclaim garnered by Jerry Springer the Opera (to which the centre organised a student outing in 2004) and his rebirth as a stand-up comedian via a DIY ethos, markedly his creative use of MySpace.

He covered areas as diverse as censorship and ticket touting, and provided some great tips on the writing process. A memorable reply to a question on intellectual property and plagiarism included references to the excellent Plagiarists’ Corner section on his website and, in particular, how his routine on Paul Nuttal of UKIP has been used by others, including the German comedian Nico Semsrott. Watch Stewart's original routine from Comedy Vehicle Series 3 on YouTube.

Matt Morrison, Course Leader on the Creative Writing BAs, noted: "what a treat it was to be there."

Our next big collaboration with the English, Linguistics and Cultural Studies Department is the Being Human (Soho Poly) event, due to take place later in the month. Stewart Lee has a long association with the Soho Theatre, in fact, and enjoyed visiting our ‘hidden space’ or ‘ghost theatre’ before the class.