Alumnus Richard Holmes, who graduated from the Journalism BA Honours course in 2015, was named New Journalist of the Year at the Press Gazette British Journalism Awards on Monday 10 December. 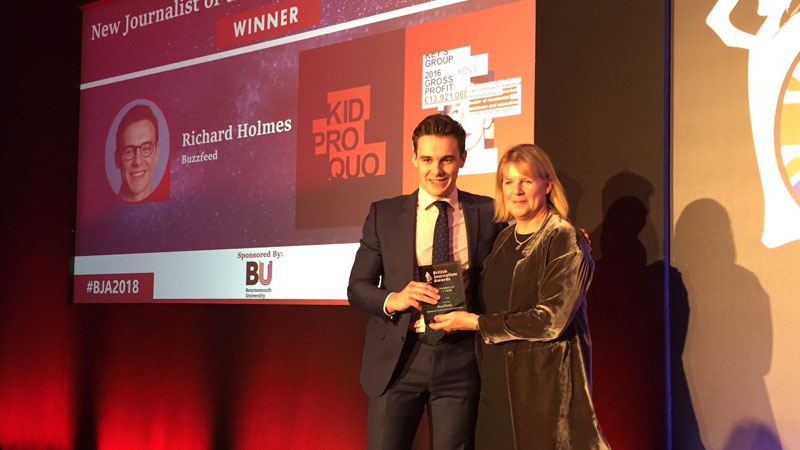 Richard became Investigative Assistant at BuzzFeed in 2015 before taking up the role of Investigations Reporter in 2016. Prior to this, he gained experience as a contributor for Vice, New York Minute Magazine and the Evening Standard among several other media organisations during his time at university.

The annual Press Gazette Awards are open to all journalists who serve a UK audience, with broadcasters competing against regional and national press. The winners of each award were chosen by a panel of 40 renowned judges who together represent a broad cross-section of the journalism industry. Judges included former Editor of the Daily Mirror David Banks; former investigations Editor of The Sun Brian Flynn; former night Editor of The Times Liz Gerard; International Editor of Channel 4 News Lindsey Hilsum and founder of the UK’s first constituency TV channel Brentford TV, John Dale.

The New Journalist of the Year award is dedicated to a relative newcomer of the industry who has been an established journalist for less than three years. The judges were on the search for someone who had done the most to bring new information to light on a matter of public interest. During his time at BuzzFeed, Richard produced a number of intriguing investigative articles on a range of topics including money laundering and danger inside Britain’s private care homes, and was named New Journalist of the Year in recognition for his investigation into the death of 15-year-old Aaron Leafe at Keys Group, Britain’s second-largest children’s private care home company.

Speaking about Richard’s story, the judges said: “This was a heavy-duty public interest story that really matters, exposing major shortcomings in standards of care for vulnerable children.”

Global Investigations Editor at BuzzFeed Heidi Blake, commented on Twitter: “Huge congratulations to our very own @Richard_AHolmes who just won young journalist of the year at the British Journalism Awards and is just a phenomenal up and coming investigative talent.”

Jim McClellan, Course Leader and Principal Lecturer for the Journalism BA Honours course, also shared his thoughts: “This is fantastic news for Richard and great recognition of the work he’s been doing for BuzzFeed. In a way, it’s no surprise to the journalism course team to see him get an award like this; he was always so focused on working in investigative journalism whilst he was on the course.”

Find out more about the Journalism BA Honours course offered at the University of Westminster.