The Fashion Design BA Honours course at the University of Westminster scooped both of the top awards at the British Fashion Council’s Graduate Preview Day last Friday. 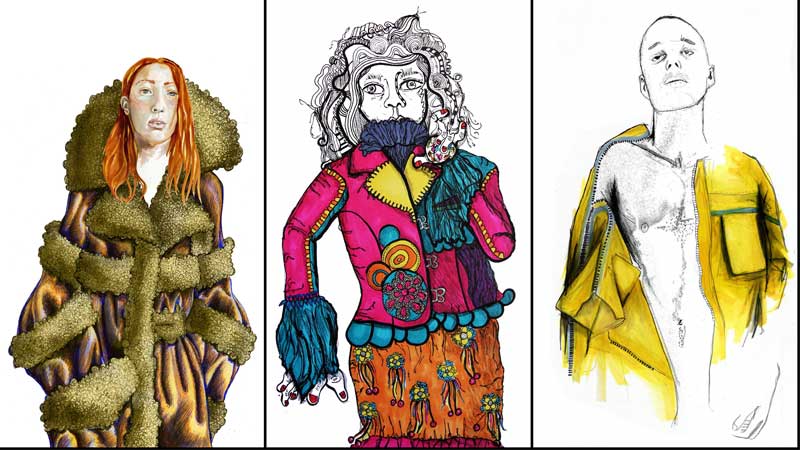 The course was awarded the Fashion Monitor Outstanding Portfolio Award as well as the WGSN Illustration Award at the British Fashion Councils Graduate Preview Day. Twenty-eight colleges from around the UK attended the event which showcases the portfolios of graduating students and celebrates emerging talent.

The judges highly praised Westminster’s graduate work with its “strong communication through illustration” and “exceptional portfolio management and navigation”. The varied range and scope of approaches was also noted with the “use of exceptional, diverse techniques in illustration” so that “each student’s individuality shone through”. Finally, “collectively, designs were cohesive because of their clear illustrative skills”.

The Fashion Monitor Outstanding Portfolio Award honours the best portfolios from both the student and college. The portfolios were judged on the students’ ability to manage a brief and show their development to their final line-up.

The awards were presented to Course Director Andrew Groves, by Sarah Mower, Vogue.com’s chief critic and the BFC’s Ambassador for Emerging Talent. Additionally, final year student Lloyd Husband was announced as the winner of the BFC X Coach competition at the event, and was awarded £3000.

Now in its 23rd year, the Graduate Preview Day highlighted a wealth of new, young and innovative British design students due to graduate this summer. The event, which provides an invaluable networking opportunity for the colleges, was attended by representatives from ASOS, Burberry, Harrods, Harvey Nichols, River Island, Topshop, and media including The Evening Standard, Vogue Italy, Vogue USA, Wallpaper and WWD.

Course Director, Andrew Groves, said: "We put great emphasis on students not only being able to realise their design work in 3D for the runway but also the importance of being able to clearly communicate their design vision in 2D form as well, via their portfolios and illustration work. It’s extremely gratifying that this has been recognised by industry, as no matter how amazing a runway collection looks, it is always the graduates’ portfolios that enable them to get fantastic jobs once they go out into the fashion industry.”

The course will be holding its exclusive Portfolio Preview Day at the Ace Hotel, Shoreditch on Monday 5 June from 9am until 6 pm. Ticket requests can be sent to [email protected]

Find out more about the Fashion Design BA Honours course at the University of Westminster.