The Art and Design Saturday Club, part of the National Saturday Club programme which gives 13-16 year olds the opportunity to study their favourite subjects for free at their local university or college, was held at the University of Westminster’s creative campus in Harrow. 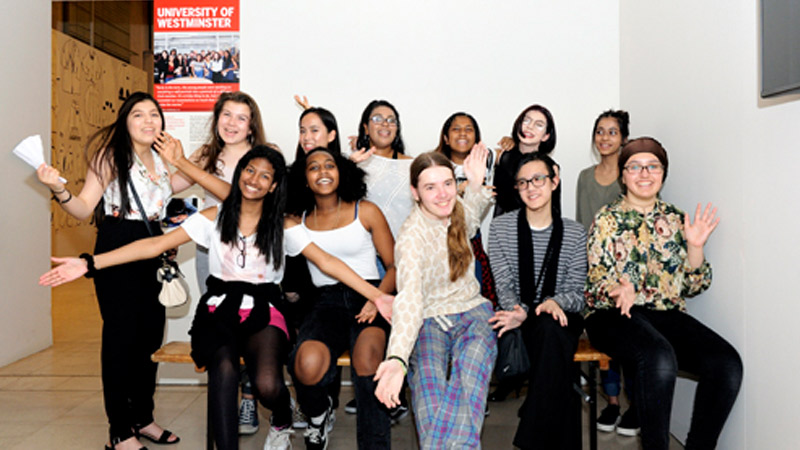 The Art and Design Saturday Club at the Westminster School of Media, Arts and Design at the University of Westminster focused on developing participants’ animation skills and covered a wide range of traditional and digital techniques, starting with gaining an understanding of the animation process and learning to use a computer software, and later progressing to thaumatropes and zoetropes, drawn animation, iStopMotion, shooting green screen and others.

Members were encouraged to bring their own ideas to each task by being given only a few simple instructions. Using the facilities at the University’s Harrow Campus, and assisted by a rotation of eight students from the Animation BA Honours course, the young people also attended screenings at the University’s Regent Street Cinema and gained a further insight into university life.

A highlight of the day was the Masterclass led by Nick Wade, the lead animator for children’s TV programme Peppa Pig, who talked about his training and work, and answered Club members’ questions.

Nick ran through a sample storyboard, talking the group through the complexities of developing an episode of Peppa Pig, from initial layouts to final details, and showed them a recently completed whole episode that is to be released in 2018.

Speaking about the experience, Hannah, one of the participants, said: “The Saturday Club was the most amazing and memorable experience, and after going I want to be an animator and work in a studio every day. I have learned so much about animation due to the very talented tutors, especially Shaun.”

Shaun McGlinchey, Senior Lecturer from the Westminster School of Media, Arts and Design and tutor at the Art and Design class, explained that watching young people’s pleasure at seeing their hard work come to life on screen was the best part.

He said: “The young people were working on morphing a self-portrait into a portrait of a different Club member. It’s a tricky thing to do, but the results exceeded our expectations so much that I had to revise the course.”

Amashie, one of the Club members, also said: “I really enjoyed going to the National Saturday Club for animation. I feel like it was a good experience and definitely helped me decide my career path in the future. We learned how to animate different things, including working in front of a green screen. I would definitely recommend going next year!”

Read more about the Robot Design Competition at the Science & Engineering Saturday Club.

Learn more about studying Animation BA Honours at the University of Westminster.