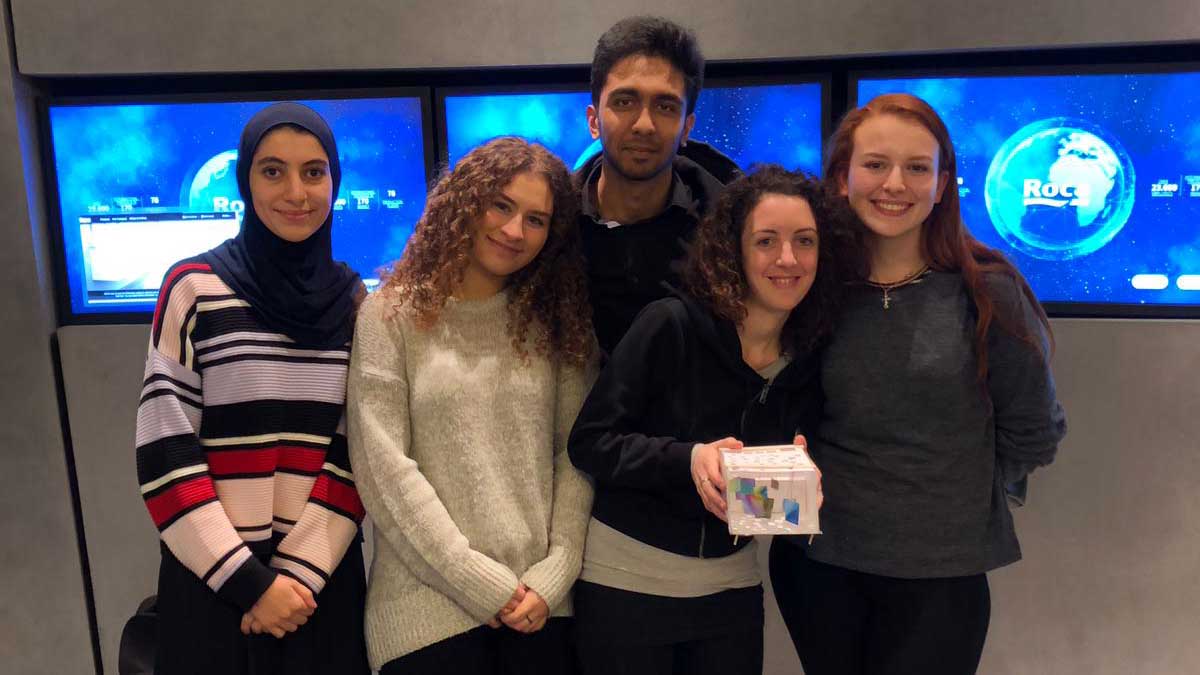 This year’s competition brief was focused on the ever-changing area of London, the Lost Road Auctions site sold to the borough of Kensington and Chelsea in 2017. Students representing the UK’s leading universities had to work collaboratively in teams of six-eight to speculate the future of the auction house. They could choose to keep the original building or demolish it and build something new.

Westminster’s ‘Squares of Light’ project focused on paintings and the experience the architecture of the space provided. The team decided to keep the façade of the existing building but take down the rest. As they were working with paintings, the idea was to have a simple white cube as a building that was lifted from the floor resembling a white canvas.

Inspired by a project they had worked on during FabFest 2018, their idea was to have paintings attached to strings that would hold them at different levels of the frame at the same time, creating a division of the interior space.

Focusing on the interior, light was one of the main features the students worked with, dividing the space into a backhouse and an exhibition and auction space. They wanted to have natural light come into the building and work as a spotlight for the paintings, guiding the visitor through a walkable space.

Mentored by a practising architect, each team had to tell the story of an object to be sold at the site using hand-drawn sketches, printed maps, site photos and the spaces they created. As a CAD-free event, the charrette invited drawn, modelled and collaged proposals only. The Westminster group made a paper and drew on top of a picture showing the experience of being in the space.

After six hours of work, students presented their CAD-free projects to the judging panel, who were looking for innovative ideas that followed the brief. The panel included Patrick Lynch of Patrick Lynch Architects, Carsten Hanssen of Atelier 27 – Paris and Dr Stephen Gage from the University of Reading.

Winning project ‘Squares of Light’ responded to all elements of the brief, demonstrating creativity and collaborative ability. Referring to it as ‘imagination taking over’, judges said the team showcased the process of moving from a formal idea to a temporal idea. The students in the group were Maryam Daoudi, Juliana Antunes, Kristina Veleva and Jay Patel from Architecture BA, and Giada Gonzalez from Architecture BSc.

Participating student Kristina Veleva said: “Overall I think it was a great experience, we got some really nice feedback and it was great to see a different point of view than why we are used to. The experience of being there and seeing how much work we can produce in one day was amazing, we never really thought we could do that. I would recommend to everyone to sing up and go.”

On its eighth consecutive year, the AIA UK Student Charrette was open to all architecture and interior design degree students across the country, encouraging young creative talent. It was hosted by the Roca London Gallery, designed by Zaha Hadid Architects, and supported by Swiss bathroom specialist Laufen.

The competition is part of the UK Chapter of the American Institute of Architects’ signature annual events. Other events include the Excellence in Design Awards, a Keynote Lecture and a Summer Gala. As the first international chapter of the institute, they also have a variety of events that provide continuing education required for most US and UK registered architects.

The American Institute of Architects has been a professional society of architects for over 150 years, representing more than 80,000 members and growing influence throughout the global architectural community.

Find out more about the Architecture BA Honours course offered at the University of Westminster.

Find out more about the Architecture and Environmental Design BSc course offered at the University of Westminster.