The Royal Institute of British Architects (RIBA) have announced the prestigious President’s Medals Student Award, Yannis Halkiopoulos, a student of the Master of Architecture (March) (RIBA/ARB Part 2) degree at the University of Westminster was awarded the Silver Medal Commendation for his work ‘Brooklyn Co-operative’. 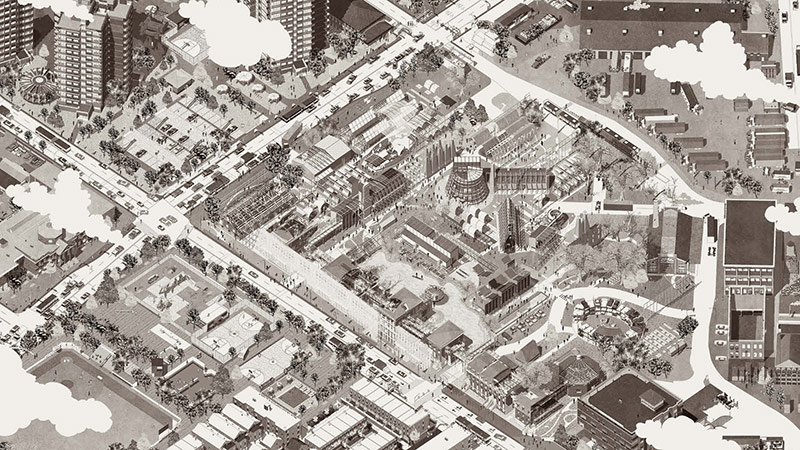 "It's a great honour to have received this recognition from the RIBA. The project is fruit of two years of experimentation in Westminster’s MArch Design Studio 16 where the notion of making architecture is strongly intertwined with its cultural significance and response to site. The tutors have been excellent for me and my project Brooklyn Co-operative is a venture into the themes of temporality, decay and facture that most fascinate me” said Yannis.

The President’s Medals Student Awards are recognised as the world’s most prestigious set of awards in architectural education. The three medals, including the Bronze for a Part 1 student, Silver for a Part 2 student, and the Dissertation Medal are awarded to “promote excellence in the study of architecture, [and] to reward talent and to encourage architectural debate worldwide.”

Yannis Halkiopoulos’ ‘Brooklyn Co-operative’ is a project which acts as a response to current plans which are to demolish the row of abandoned houses to build a suburban supermarket. Brooklyn Co-operative is a cluster of re-configured agrarian structures which act as food production and consumption sites in an alternative supermarket proposal for Admiral’s Row. Yannis through his work offers an alternative food market which aims to incorporate the row of houses and re-kindle the consumer with the origin of the food produced and promote regional traditions, gastronomic pleasure and the slow pace of life which finds its roots in the Slow Food Movement NY.

The University of Westminster’s Head of the Department of Architecture, Professor Harry Charrington congratulated Yannis’ achievement; “Yannis Halkiopoulos’ remarkable MArch scheme set in Brooklyn won a Commendation for the RIBA President’s Silver Medal. This is a remarkable achievement for a beautiful and beautifully wrought scheme. Congratulations to Yannis, and to his tutors in Design Studio 16, Anthony Boulanger, Guan Lee and Stuart Piercy.”