University of Westminster Lecturer Arthur Mamou-Mani, now awarded with the RIBAJ Rising Star Award, says he came to the UK “to follow in the footpath of the great high-tech and ground-breaking architects, such as Norman Foster and Zaha Hadid.” 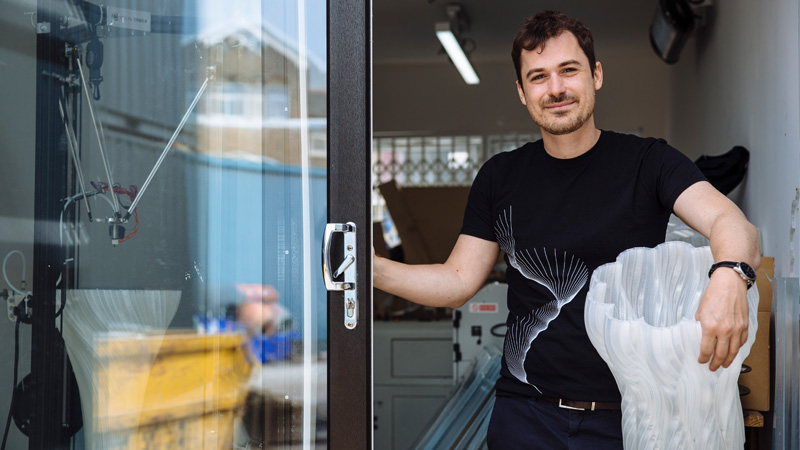 Mamou-Mani set off in his own direction using the knowledge of digital fabrication and parametric modelling he had acquired at the Architectural Association. In 2011 he founded Mamou-Mani Architects, a firm that specialises in digitally designed and fabricated architecture, then he set up a digital fabrication laboratory named Fab.Pub in Hackney.

Arthur Mamou-Mani has been teaching in Design Studio 10 on the Master of Architecture (MArch) (RIBA pt II) programme with Toby Burgess for six years, while also running a joint blog with his students. The blog is called We Want to Learn and is a platform for students to showcase their diverse range of work, which also includes winning projects around the theme of Burning Man festival.

Mamou-Mani is an active contributor to the blog and his passion for digital fabrication can be easily perceived from his posts, the latest of which share images of his students’ first attempts to materialise their research into fractals, generated by a software application for creating 3D fractal imaging.

By giving designers access to the technologies of both coding and making, Mamou-Mani has helped break down the barriers between architects and related professions such as contractors, engineers and designers in other fields.

Mamou-Mani has also managed to show an entrepreneurial spirit with The Magic Garden, the RIBA Regent Street Windows project for Karen Millen in 2013. It won the Crown Estate Award and raised profits at the flagship store by 20 per cent by attracting more visitors.

Karen Millen has since created a dress inspired by Mamou-Mani’s original piece and commissioned the firm for five further schemes. The project inspired a passer-by who commissioned the practice to design a hotel for the space tourists of Virgin Galactic as well. Mamou-Mani has also been working on open-source software, called Silkworm, which sends information to 3D printers directly from Curve plug-in and the tool has helped push 3D printing to its limits.

Before founding the practice, Mamou-Mani worked with Atelier Jean Nouvel, Zaha Hadid Architects, and Proctor and Matthews Architects. He has gained an enormous traction with high-profile clients in a short period of time.

Speaking about his recognition, Arthur Mamou-Mani said: “It's such an honour to be awarded the RIBAJ rising star award. I hope it is a sign that our field is embracing the digital fabrication and entrepreneurial revolution which fuels my companies and academic journey.”