Anne–Gaelle Colom collects the .net Innovation of the Year award

Anne-Gaelle Colom, Course Leader for BEng/MEng Mobile and Web Computing in the School of Electronics and Computer Science, is a member of the jQuery Mobile team. She is pictured with Paul Boag from Headscape, accepting the .net magazine award 2011 for Innovation of the Year on behalf of the team at the .net magazine awards 2011 Party on Thursday 24 November 2011. 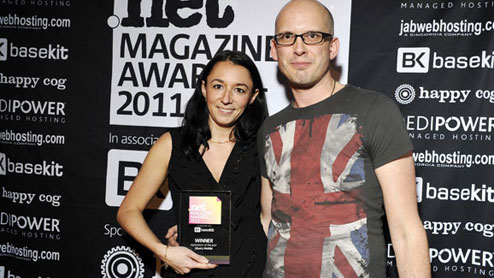 “I first came across jQuery Mobile in September 2010 and immediately recognized that this emerging technology would have significant impact in the mobile web arena, and I was keen to both contribute to and bring this technology to our students following mobile and web development pathways. I have since taught it to 220 second and third-year students and developed two mobile applications with this framework, for the iWestminster (the Westminster Learning Surface) project.

I started to contribute to jQuery Mobile while doing this development work, and after seeing some of this effort, Todd Parker, project lead for jQuery Mobile, asked me to help him put together some content to be ready for the final release 1.0. I am so thrilled that my Web design and development work has contributed to and has been used by this award winning open source mobile development framework. This has been a personal success as well as a success for my students, who get taught jQuery Mobile from the inside!”

jQuery Mobile can be summarised as “A unified user interface system that works seamlessly across all popular mobile device platforms, built on the rock-solid jQuery and jQuery UI foundation. Its lightweight code is built with progressive enhancement, and has a flexible, easily themeable design.”

Anne-Gaelle says: “I was very honoured to accept the .net magazine award for Innovation of the year on behalf of the team. The ceremony took place in the heart of Soho, and 300 of the world’s most creative Web developers and designers were invited. It was fantastic to meet and exchange ideas with some of the leading people in web design and development”.