Soul singer Michael Kiwanuka, a previous student of the BMus Honours Commercial Music Performance degree at the University of Westminster, has been awarded first place in the BBC Sound of 2012 list. 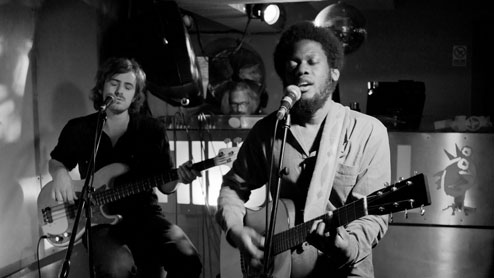 The BBC Sound of 2012 is an annual list now in its tenth year and is compiled using nominations from 184 key UK-based music critics, broadcasters and bloggers. Previous winners have gone on to achieve successful careers in the music industry and include Jessie J, Adele, Mika, Ellie Goulding, Corinne Bailey Rae and Keane.

Hussein Boon, Programme Director for BMus Commercial Music Performance, says, "Michael joined the BMus in 2008 looking for a course that had a wider sense of focus, embraced a diverse range of playing and performance styles and also had a more diverse student profile. Even from his early days on the course, Michael was very committed as a performer, guitar player and songwriter. His interaction and collaboration with his peers on the course were always interesting and Michael was a great facilitator for others.

"Whilst Michael may well go on to be recognised, primarily, as a singer and songwriter it should be remembered that he is a phenomenal guitar player with an ease and skill level beyond his young years. Michael demonstrates that balance between accomplished technique and soul and leaves you in no doubt as to his ‘core’ values, which speak volumes in his work.

"From all of us on the BMus and the Music department University of Westminster we congratulate Michael and wish him continued success in 2012 and beyond."

The BMus Honours Commercial Music Performance is a three-year full-time degree designed for those entering the music industry as performers, songwriters, composers, musicologists and educators. The course aims to equip students with the full practical and academic skills needed to make it in the business.