Hussain Manawer has set a new Guinness world record for the world’s largest mental health lesson. Backed by the Duke and Duchess of Cambridge and Prince Harry, he organised the event in conjunction with Dame Til Wykes, Professor of Clinical Psychology and Rehabilitation at King’s College London and Director of the NIHR Clinical Research Network. 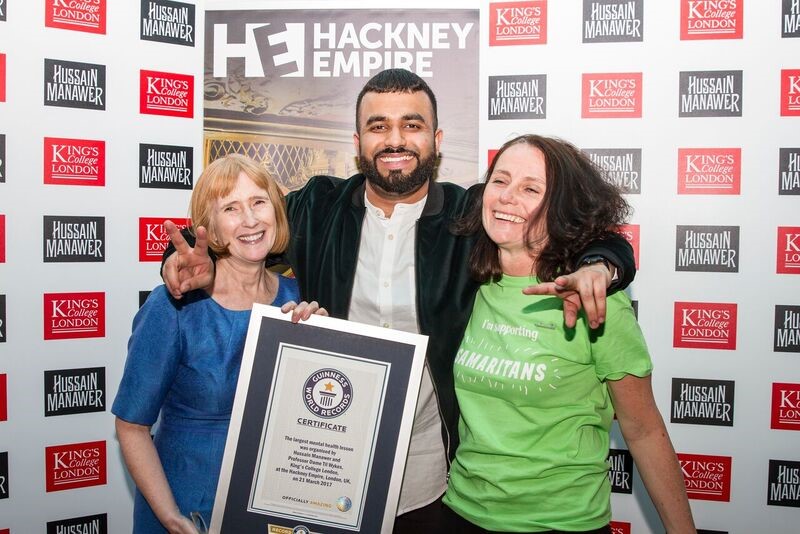 Over 500 school children from across the UK aged between 13 and 18 took part in the 30-minute lesson at the Hackney Empire. The interactive session was designed to encourage debate and conversation around the difficult topic of mental illness, and covered issues such as depression, stigma, where to get help and how to maintain good mental health.

Hussain graduated in 2012 from the Quantity Surveying BSc course. He has gone on to become an advocate for greater awareness around mental health issues through his YouTube channel Hussain’s House. In 2016, he won the Krugar Cowne Rising Star competition for his passionate campaigning as well addressing misconceptions of Islam and what it is to be a Muslim. In 2018, he will become the first British Muslim in space.

Speaking to the audience, Hussain said: “If you’re going through something you need to speak to someone about it, but if you don’t feel comfortable talking to your friends then maybe you need to evaluate who your friends are.”

At the event, Hussain also performed his poem ‘I’m ashamed’, which will be released on his forthcoming EP ‘Am I going too deep?’ during Mental Health Awareness Week from the 8-14 May 2017.

Hussain told us: “I organised the world’s largest mental health lesson, because the taboo of a subject exists due to our lack of knowledge about it. The lesson was education mixed with entertainment – it’s something I've always wanted to do and keeping it in East London is something I'm as equally passionate about.”