All of us are called upon to defend journalism, says Charles Wheeler Award winner Lyse Doucet 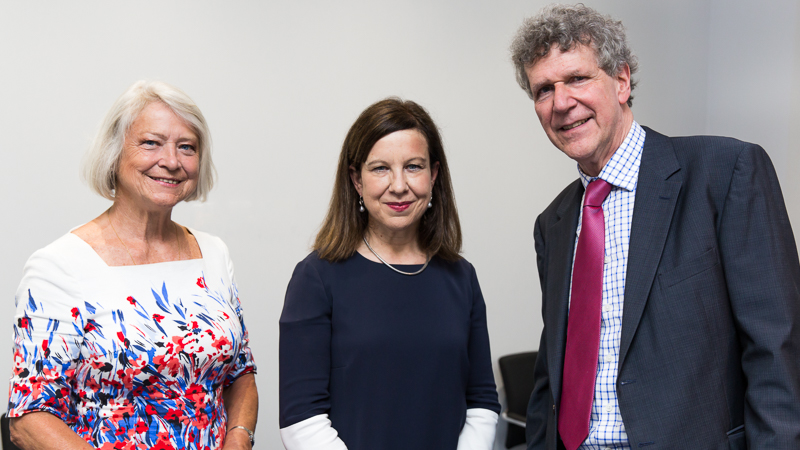 Organised in collaboration with the British Journalism Review, the annual Award has been set up in honour of the late Sir Charles Wheeler, widely acknowledged as one of Britain’s greatest broadcast journalists.

After a film of highlights from Lyse Doucet’s career in broadcasting, Sir Charles’ daughters Shirin Wheeler and Marina Wheeler presented the Award. In her acceptance speech, Doucet said: “What is the story, what is the topline that brings all of us together tonight? Certainly not me. The top story is about a gentleman who represented everything and more of what a great, great journalist should be. How did they describe Charles Wheeler? Integrity, authority, humanity and evidence. Are there better words in the lexicon of journalists? A man focusing always on what mattered in our world.”

Doucet concluded her speech by saying: “Charles Wheeler’s message to all of us is to be uncompromising, unflinching, with a little bit of mischief, never with malice, but always, always focusing on what matters. And journalism matters now.  It mattered then and it matters now perhaps more than ever before. Because all of us are called upon to defend it - to be better, to be braver, to be bolder. How did they describe Charles Wheeler? Integrity, authority, humanity. All of us are privileged to walk in his footsteps today.”

Distinguished broadcaster and author Kate Adie’s keynote lecture followed the presentation of the Award in which she expressed concern about press freedom being jeopardised in democracies around the world. She noted that both the changing media landscape in the UK and the rise of fake news pose significant challenges to journalists. She urged more emphasis on professional “on the spot” evidence gathering, and pointed out the vital importance of local journalism in holding local authorities to account, citing as an example the recent devastating fire at Grenfell Tower in London.

Her lecture was followed by a Q&A session chaired by the University of Westminster’s Professor of Communications Steve Barnett and the evening culminated in a lively reception.

Lyse Doucet began her BBC career reporting from West Africa in 1983, and for 15 years reported from Pakistan, Afghanistan, Iran, and across the Middle East. In 1999 she joined the BBC's team of presenters on BBC World TV and World Service Radio. She played a key role in coverage of the Afghan and Iraq wars and was instrumental in the BBC’s reporting of the Arab Spring from Tunisia, Libya and Egypt as well as the Middle East conflict in Israel and Gaza. More recently, she has reported across the BBC on escalating conflicts, particularly in Syria. She has made two documentaries, Children of Syria (with Robin Barnwell, 2014) and Children of the Gaza War (with James Jones, 2015).