The University was delighted to welcome one hundred alumni to its Annual Alumni Reception on Tuesday 23 June, in celebration of the 50th birthday of the Students’ Union. 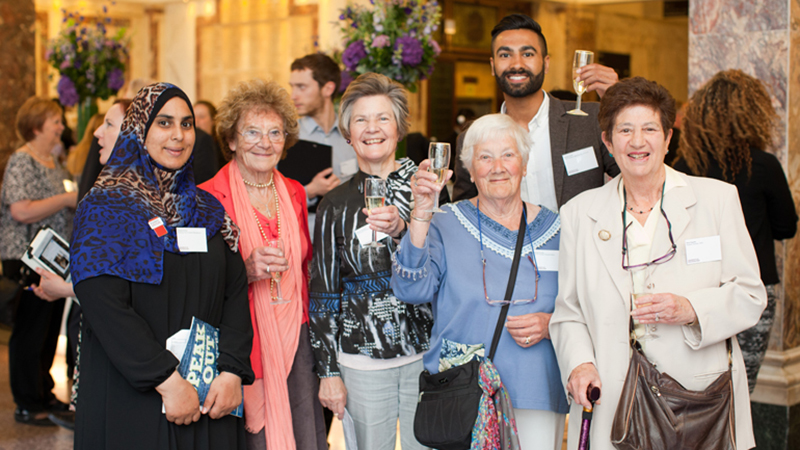 The Alumni Reception is held each year to thank those who are donating or volunteering their time to support important University initiatives. As 2015 marks 50 years since the Students’ Union (UWSU) was formally established, this year’s Alumni Reception provided the perfect opportunity for guests to celebrate this important milestone in the University’s rich history.

Guests at this year’s Alumni Reception enjoyed a special exhibition which showcased notable moments in student life across the last five decades, including politics and student protests, to the iconic bands that played at the University during its days as a Polytechnic; documented through innovative posters designed by students which reflected the cultural changes of the sixties and seventies.

Alumni at the event contributed to the exhibition by sharing unique memorabilia from their student days, including Gerry Cox (Media Studies 1988) who brought in his vintage copies of McGarel – as the student magazine was once known - from 1986-87.

Owen Spencer-Thomas (Sociology 1967), who became the first president of the Students’ Union in 1965, was one of the keynote speakers at the event. In his talk, Owen shared his memories of the birth of UWSU:

“In 1965, the Polytechnic governing body gave the go ahead for a Students’ Union. It fell to us student reps to negotiate the constitution of the new union with the governing body. My A-level in English Law came in handy as we hammered out the new constitution.”

Guests listened as Owen described the highlights of his time as President, from protesting the government’s decision to discontinue subsidising the British Commonwealth students, to enjoying performances by Pink Floyd, Jimi Hendrix and Fleetwood Mac at the Polytechnic.

Owen said: “These were heady days and there are so many stories to tell, I wish you a future in which you might experience the excitement and joy witnessing the next generation of fledgling artists and scientists that will shape tomorrow’s world.”

Rianne Gordon, who has just concluded a two-year term as UWSU’s Vice-President of Harrow, also gave a short speech which highlighted what the Students’ Union means to her:

“Though we’re celebrating its 50th birthday, I would consider this Union to be in its infancy. I hope others will agree when I say that the principles from which it was established have continued to thrive; always advocating the rights of Westminster students and working in partnership with the University.”

Included amongst the guests was Nigel Molden (Sociology 1969), who produced the recording of Fleetwood Mac at the college. Nigel said: “It was a wonderful evening and one that reflected the unique nature of the original Royal Polytechnic Institution and The Polytechnic. There was an immense amount of not only achievement and experience but also enthusiasm for the future [of UWSU] in the room.”