Date 13 February 2020
Time 5:30 - 7pm
Location Regent Street
Cost Free
Click icon to Share
Register for this event
The event is free and open to all, but booking is necessary.

The Centre for the Study of Democracy and the Institute for Modern and Contemporary Culture invites Sébastien Chauvin (University of Lausanne/CDG) for the second cycle of the seminar series “French Politics: A Neighbour’s ‘History of the Present’”, entitled “French Universalism vs. Alien Identities?” 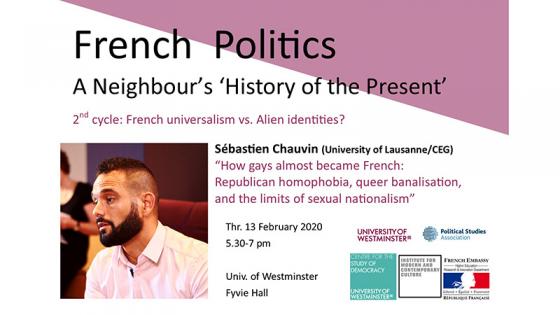 In the 1990s, queer expression, sociality and movements in France were frequently stigmatised as “communautariste” (sectarian) and placed outside the bounds of the national imaginary. That accusation gradually receded in the 2000s and 2010s with the expansion of equality claims, legal victories and heightened cultural visibility. As in other European countries, some forms of queerness were symbolically co-opted as part of the French national project by conservative discourses and parties articulating the ‘protection’ of sexual and gender minorities to racist, anti-immigrant or classist agendas.

Moreover, the banalization of queer identities, far from generating homogeneity, has opened the way to plural forms and figures of non-straight and non-cis visibility and existence. While this pluralisation tends to lay bare internal inequality and social contradictions within LGBTQI communities and creates space for conservative gay and lesbian politics, it has also allowed for the emergence of movements and voices countering reactionary articulations of queer safety.

The presentation will focus on four recent incidents when the articulation between sexual/gender minority protection and exclusionary politics were simultaneously enacted and resisted.