Skip to main content
Date 11 June 2020
Time 5:30 - 7pm
Location Regent Street
Cost Free
Click icon to Share
Register for this event
The event is free and open to all, but booking is necessary.

The Centre for the Study of Democracy and the Institute for Modern and Contemporary Culture invites Nacira Guénif-Souilamas (University Paris 8/CEFEG) for the third cycle of the seminar series “French Politics: A Neighbour’s ‘History of the Present’”, entitled “Can France Think of Itself as Postcolonial?”

Nacira Guénif-Souilamas’ paper will tackle the issue of some subjectivities who already live as postcolonial. 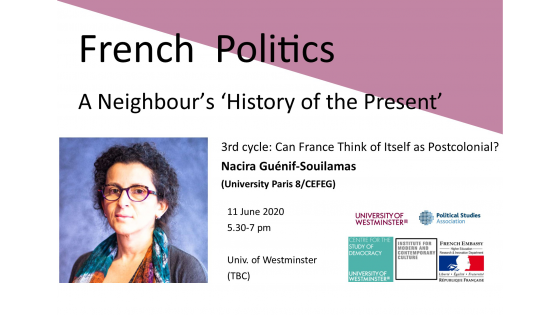