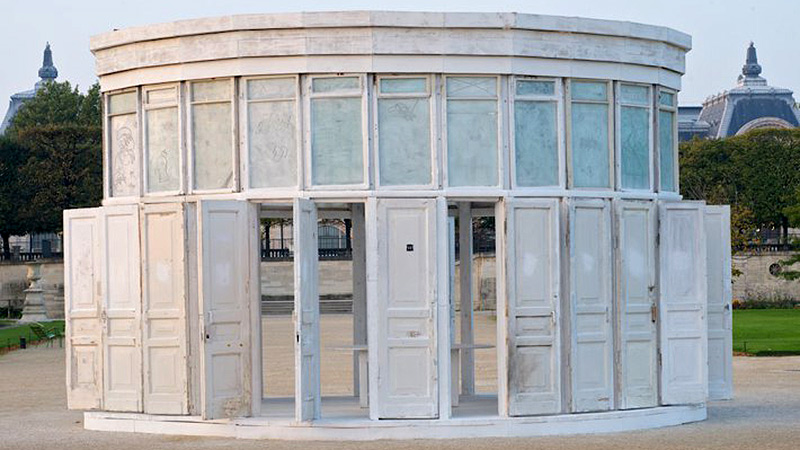 Potential Architecture draws on the interconnected histories and cultures of renowned practitioners from Russia, Slovenia, Norway and the UK working at the increasingly diverging interface of art and architecture. Each has an interdisciplinary practice that enables heightened responses to ideas of how communities evolve, how social spaces are used and buildings made. Cultivating new ideas and alternative approaches around the built environment, their commissions for the exhibition indirectly respond to a growing critique on the negative effects of property speculation.

Alexander Brodsky is one of Russia’s best known architects and a sculptor, who was a key member of the paper architects’ movement during the 1970’s Soviet era. He is renowned for projects melding art and architecture using recycled materials such as plastic bags, oil, glass and ice to create new structures and aesthetics. Famous for refusing participation in the state sanctioned production of low-quality, standardised buildings, his practice challenges ideas of of permanence, sustainability and civic pride. His best known works include Vodka Ceremony Pavilion (2004), Settlement at the 2006 Venice Architecture Biennale, and Cistern (2010).

Sean Griffiths is an artist and architect, acclaimed for controversial visions of architecture influenced by fine art. In 1990 he co-founded FAT, the influential UK architecture practice renowned for its critical approach to art/architecture. His work challenges notions of representation, monumentality & authenticity. His 2014 work, A House for Essex was a collaboration with Grayson Perry for Living Architecture, and last year he curated the British Pavilion at the Venice Architecture Biennale.

Joar Nango is an artist and architect who creates structures relating to indigenous identity and community interaction, influenced by his Sami heritage.  His work investigates the boundaries between architecture, design and visual art and has shown at the Norwegian Sculpture Biennial (2013) and the National Museum of Art, Architecture & Design, Oslo (2013).

Apolonija Šušterŝič has for twenty years explored the social aspects of living environments as manifested in art and architectural contexts through dialogue with artists, architects, critics and curators, and by encouraging communities to develop their own alternative visions for urban living. She took part in Artes Mundi 5 (2012) and Berlin Biennale (2001).

Potential Architecture is a collaboration between Ambika P3, the University of Westminster’s Faculties of Media Arts, Design & Architecture and Built Environment, and curator David Thorp.

This exhibition is supported by Arts Council England, The Norwegian Embassy and Ambika P3, The University of Westminster.