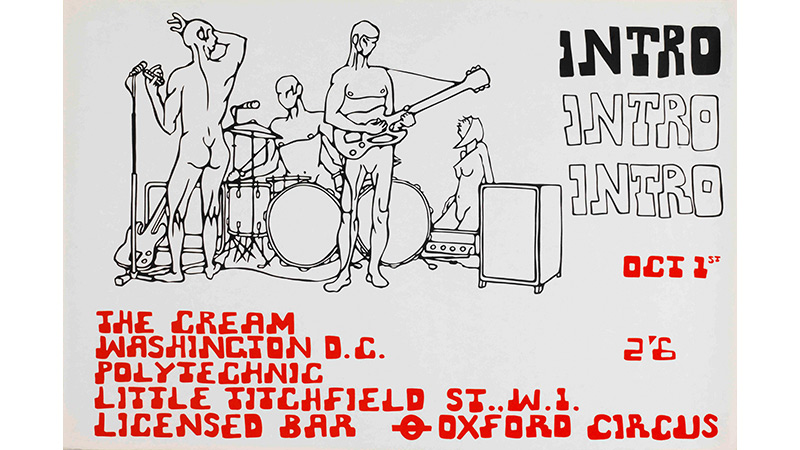 London Gallery West is delighted to present Poly Gig Posters 1965-1975, a showcase of unique materials from the University of Westminster Archive.

These screen-printed posters were designed and produced by students to advertise gigs organised the Students’ Union of the Regent Street Polytechnic and its successor, the Polytechnic of Central London (PCL). Making the most of its central London location, the Union booked many up-and-coming rhythm and blues, folk, psychedelic and rock acts, and even hosted the first UK performance by Jimi Hendrix.

In 1965 the Regent Street Polytechnic placed its Students’ Union on an independent footing, with the first paid sabbatical officers, and new offices complete with a bar. Having previously organised a few ‘hops’ and end of term balls, the Union now found itself with both the funds for, and expectations of, a more active social programme. Just five minutes’ walk from Carnaby Street, it was at the heart of the ‘Swinging Sixties’ and its students couldn’t help but be influenced by the cultural revolution around them. Architecture students Roger Waters and Nick Mason held rehearsals for their band Sigma 6 in the student common room at Little Titchfield Street, and would later return with Pink Floyd to play in the building’s grand art deco Portland Hall in 1967 and 1968.

One of the first bands to be booked by the new Students Union Ents Officer was Cream, in October 1966. In the audience that night was a 23 year-old Jimi Hendrix, newly arrived in the UK. Invited to join Cream on-stage for an encore, the young guitarist tore into a version of Howlin’ Wolf’s Killing Floor, causing Eric Clapton to leave to the stage and ask "Is he always that f***ing good?" Other bands to also grace the stage included Howlin' Wolf himself, John Mayall, The Who, Freddie King, the Crazy World of Arthur Brown, Fleetwood Mac, Atomic Rooster and the Soft Machine, amongst others. The success of the gigs led to the first Poly Arts Festival in November of that year, with the Polytechnic taking over the Roundhouse in Camden for performances by Manfred Mann and Deep Purple alongside the Explosive Spectrum Light Show.

Displayed together for the first time, these eye-catching posters reflect the wider cultural changes of the time, with influences from mod, psychedelia and hippie culture, and with references to contemporaneous magazines such as IT and OZ. Alongside the posters, the exhibition incorporates memorabilia, ephemera, and interviews from the archive’s oral history collection, to explore the lives of students at this exciting period.

Private view
Tuesday 27 January, 5–8pm
The exhibition will be opened by Keith Harris, former Motown manager and Senior Fellow and Chair of MusicTank at the University of Westminster. Including live performance by Commercial Music Performance BMus Students.

Gallery talk
Wednesday 18 February, 1–2pm
Music manager and producer Peter Jenner, who played a core role launching new bands in the cultural revolution of the mid-1960s, including Pink Floyd in their formative years on the underground music scene.