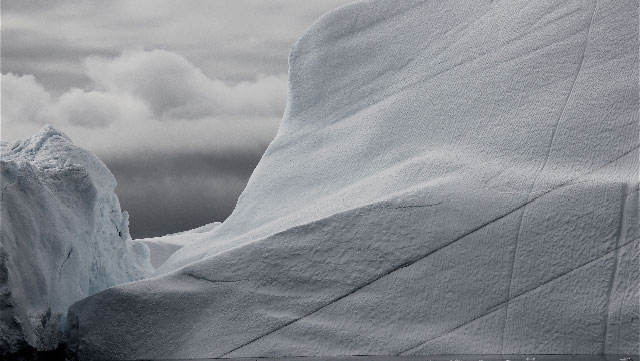 Out of Ice by Scottish artist Elizabeth Ogilvie is a dramatic new exhibition comprising environments created with ice and ice melt, constructions, films and projections of ice systems. It is an exploration of the poetics of ice with much of it created through collaborations with Inuit in Northern Greenland, reflecting on their deep and sustaining relationship with ice. It also presents film from the scientific expedition from Antarctica, the Lake Ellsworth Consortium led by Martin Siegert and supported by the British Antarctic Survey.

The use and knowledge of the ice-covered sea remains the pillar of the Inuit’s identity and resilience and their most prized intellectual treasure. Immersive and contemplative, the exhibition seeks to portray the psychological, physical and poetic dimensions of ice and water while drawing attention to ice processes. It suggests that absence of ice poses a real danger to our planet. Describing the presence of ice in the world from a human perspective, it reveals the observational traditions of fieldwork, combined with visual splendour.

Described as one of the most significant artists of her generation in Scotland, Elizabeth Ogilvie has a strong track record in realising large scale projects which challenge conventions. Her work is a fusion of art, architecture and science, with water and ice as the main focus for her practice.

International conference at the University of Westminster

To coincide with Out of Ice, the Centre for Research and Education in Arts and Media (CREAM) of the University of Westminster is convening 'Reading and Exhibiting Nature', a three-day conference examining how nature is being understood in contemporary cultural and artistic production.

Elizabeth Ogilvie was in born Aberdeen and lives and works in Fife, Scotland. She has exhibited widely in the UK and internationally: recent major solo shows include Dundee Contemporary Arts and Contemporary Art Space Osaka [CASO] and over the last couple of decades the artist has had solo shows in the Arnolfini, Fruitmarket, Mead, Talbot Rice Gallery, CCA, Stephen Lacey Gallery, Odapark Netherlands, Daegu C.A.C., South Korea and earlier in the Serpentine. She is an Honorary Senior Research Fellow at University of Edinburgh where she was a lecturer.

Funders and supporters for Out of Ice include Creative Scotland, Arts Council England, The Russell Trust.