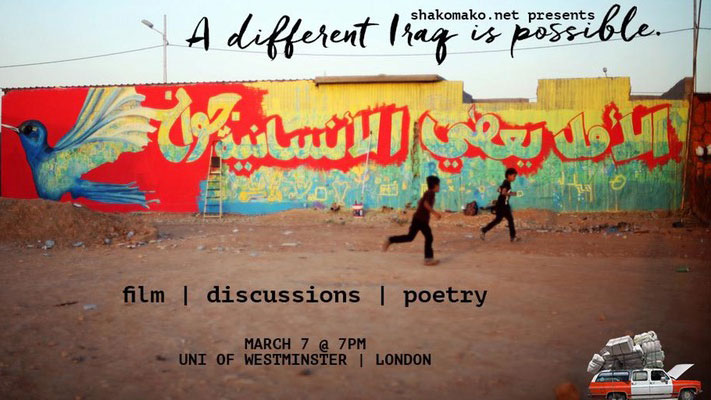 Join us for a night of film, discussions and poetry as we celebrate the relentless spirit of Iraqis worldwide who organise every day for an inclusive and equitable future for Iraq.

For decades, Iraqis around the world have had to contend with the prospect of losing their very existence, both culturally and physically. Wars, dictatorship, sanctions and the aftermath of the American invasion of 2003 have had catastrophic effects on Iraqi civil society, both inside the country and in the growing diaspora. Despite the death, displacement and destruction, communities worldwide continue to organise for a different Iraq. We will shed light on these initiatives in this event that is meant to inspire and empower everyone to work towards a different and better future for Iraq.

The event is open to all students and staff at the University of Westminster, as well as the members of the public.

Philip Juma – an English-Irish-Iraqi, Philip has been influenced by both Middle Eastern and modern European cuisine throughout his upbringing and this is reflected in his style of cooking today. Philip will discuss his experiences in reviving Iraqi cuisine to different audiences and the role that food plays in shaping identity and smashing stereotypes.

Zeidon Al Kinani – An Iraqi writer, organiser and member of the editorial collective of shakomakoNET, an independent magazine that discusses the people and culture of Iraq. Zeidon is also an alumnus of the University of Westminster in Politics and International Relations. Currently, Zeidon is doing an MSc in International Public Policy at the University College London.

Jenny Grossbard – A writer, graphic designer, creative strategist and member of the editorial collective of shakomakoNET, an independent magazine that discusses the people and culture of Iraq. Jenny will discuss the ability of publishing tools to create independent media platforms for communities and initiatives worldwide.

Ahmed Habib – An Iraqi writer, organiser and member of the editorial collective of shakomakoNET, an independent magazine that discusses the people and culture of Iraq. Ahmed will discuss the need for greater organising amongst Diasporic Iraqis in the forging of a different future for Iraq.

Sham Murad – A UK-based Iraqi activist and an alumnus of the University of Westminster in Politics and International Relations who will discuss the role women have played in holding together communities during times of war, and how, moving forward, their role will be a decisive factor in shaping a progressive and inclusive Iraq.

Raya Al Jadir – an Iraqi London-based writer and journalist from Mosul who specialises in covering disability and accessibility, and will discuss the importance of creating an accessible Iraq.

We Are Two Rivers – a Scotland-based cultural platform for the diaspora of communities from around the Tigris and Euphrates Rivers will discuss the work that they are doing.

Rafeef Ziadah – a Palestinian spoken word artist and human rights activist. Rafeef will discuss the connections between Iraq, Palestine and other struggles while performing some of her most prominent pieces. Currently, Rafeef is a post-doctoral research fellow at SOAS University of London.