David Manlow, Principal Lecturer on the Criminology BA Honours course, has won the British Society of Criminology award for Excellence in Teaching Criminology. 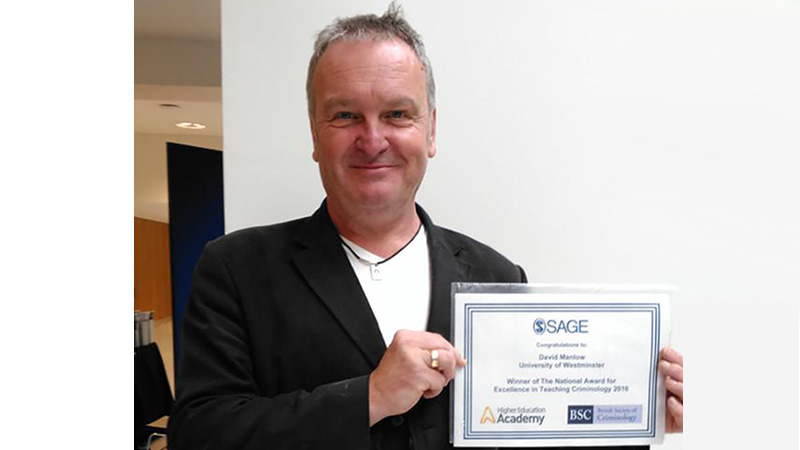 David collected his award at the annual British Society of Criminology conference on 6 July. On receiving the award David said: “I am absolutely delighted that the course at Westminster, and its dedicated teaching team, has received such national recognition.”

David’s work in leading and embedding the use of innovative teaching strategies within a pedagogical framework that is both flexible and inclusive in its mode of delivery won him the prestigious award.

The University’s distinctive BA Criminology course was also recognised for the way its design meets the needs of a diverse student population and for its commitment to developing independence and critical thinking in students.

The winner was chosen by a panel of judges from universities across the country. The nomination process opened in December, and David was chosen from a shortlist of high-level academics.

In supporting David’s application, Dr. Thomas Moore, Faculty Director for Teaching and Learning at Westminster, said: “At a departmental level, David is an inspiring colleague and has demonstrated real initiative in supporting student learning. He has demonstrated academic leadership at a senior level, especially in relation to curriculum design and course leadership in Criminology. His most important contribution has been to engage students from a diversity of backgrounds in making the curriculum relevant to their career and professional ambitions.”

Pro Vice-Chancellor and Dean of Social Sciences and Humanities Professor Andrew Linn said: “David is a star teacher on a star course, and in the year in which David received this thoroughly deserved recognition, the Criminology course he leads performed strongly in the Guardian league table. The success of Criminology at the University of Westminster looks set to continue with the appointment of two new lecturers and a professor in this area, so we expect great things in the future, building on an excellent year for David and the team.”

David Manlow is currently co-authoring a major new textbook for criminology undergraduates, which will be published by Oxford University Press in March 2017.

Find out more about Criminology BA Honours at the University of Westminster.