Irish involvement in the British construction industry has been constant but it developed particularly during the period of the industrial revolution in Britain. The eighteenth, nineteenth, and early twentieth centuries, which were, respectively, the periods of the canals, the railways, and some of the early large-scale civil engineering projects, saw large numbers of Irish workers involved in British construction. On many of these construction schemes, Irish and British workers lived for long periods in camps and other types of temporary accommodation. In the post-1945 period, rocketing levels of unemployment in Ireland, and a boom in British construction created the conditions for the further entry of huge numbers of Irish workers into the industry.

Irish involvement in British construction was accompanied by the popularisation of particular stereotypes about them, many of which draw on a deep-rooted anti-Irish prejudice within British society. These included the views that: Irish workers were a source of unskilled, cheap labour, which was used by employers to lower the wages of other workers; they were not hugely interested in trade unions, or in collective struggle; and, away from the workplace, they lived chaotic lives, spending most of their time and money in the pubs.

In this clip, Jim Moher reflects on some aspects of the Irish experience in Britain during the 1960s.

Our research included interviews with several Irish workers, some of whom were trade union and political activists and shop stewards. We also spoke with many others who had worked alongside Irish workers. And, whilst there were aspects of these testimonies that accorded with some of the traditional narratives, there were also others that painted a very different picture. On sites such as the Barbican and Stevenage many of the leading trade union activists were Irish. The accounts from workers on these sites suggest that contextual factors such as the nature of the site and the type of organisations that were active on it, including various labour movement and trade union bodies, were highly important in shaping the views and activities – sometimes in a life-changing way – of many who worked there, regardless of nationality. 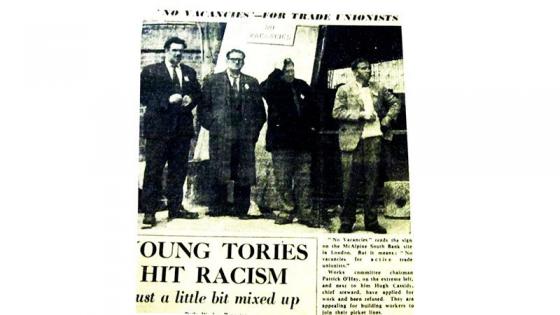 The construction industry has always been a dangerous industry in which to work, characterised by poor health and safety provisions