Labour-only subcontracting, or lump labour, was a type of employment  system whereby a contractor would hire, on a labour-only basis, a  subcontractor, which was often an individual worker or a collection of  individuals, and pay a lump sum for an agreed amount of work. It was a  form of self-employment which was not new in the construction industry,  but which rose exponentially in the post-war decades, particularly in  London and the South of England.

The attractions of labour-only  subcontracting were obvious from the viewpoint of the major contractors.  Because the labour-only workers were legally self-employed, the major  contractors paid no national insurance contributions, sick pay, or  holiday pay etc. This meant they were able to pay workers a higher rate  of pay, which in turn allowed them to continually recruit the skilled  labour that was sometimes in short supply. Agreements between  contractors and labour-only workers were individual contracts, which  were negotiated outside of the collective bargaining structures of the  industry.

In this clip, Fred Udell recalls the struggle against labour-only sub contracting in the early days of Stevenage new town.

The ‘lump’ workers, therefore, had no vested interest in  collective action or collective struggle. Concerns over health and  safety, the length of the working day, and wage rates, all of which  exercised the attention of the trade unions in this period, meant little  to lump workers, whose only concern was to finish the job quickly and  move on. As a result, the rise of labour-only subcontracting was matched  by a steep decline in trade union membership in the industry. Some  building workers were forced by the major contractors to go on the  ‘lump’ as the only way of getting work. Trade union activists regarded  labour-only subcontracting as a malicious system that would destroy site  organisation and eradicate hard-fought rights and conditions and tried  to fight back. As a result, in the period that our research examined,  there were many disputes on construction sites that centred on the issue  of labour-only subcontracting. It is a system that continues to pose a  huge challenge to construction trade unionism in Britain today. 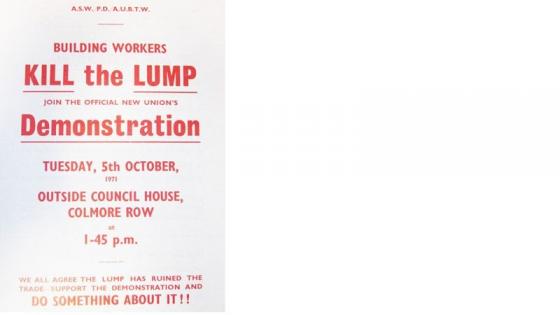 Leaflet for an anti-lump protest in Birmingham.