University of Westminster alumna Meg Dyos has made history as part of the first all-female team and the first four-person team to row across the Pacific. 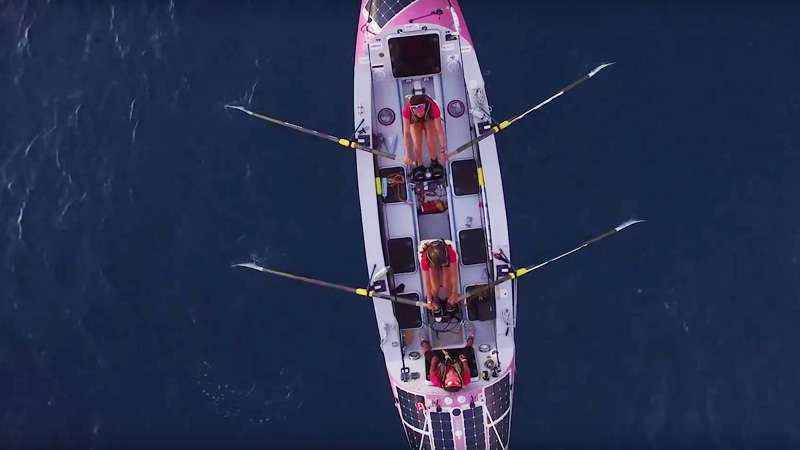 The Coxless Crew is a team of six women, three who rowed the entire journey – Laura Penhaul, Emma Mitchell and Natalia Cohen – and three who each rowed one leg – Meg, Isabel Burnham and Lizanne Van Vuuren. A 29-foot boat called Doris took them across the ocean, with only a small cabin the size of a two-man tent for sleeping and washing. Incredibly, they rowed for 24 hours each day, with two-hours on and two-hours off, and survived on meals made with hot water.

Meg, who graduated with a degree in English Literature in 2014, told us: “I’m not sure what to say other than being completely overwhelmed with the response that we have had, and that the donations have been flooding in!”

The journey has so far raised £38,500 for The Coxless Crew’s charities including Walking for the Wounded’s fund for injured servicewomen, and Breast Cancer Care, a UK-wide charity which provides specialist support for the 55,000 people diagnosed with breast cancer each year.

Before she joined the Coxless Crew for the final leg of their journey, Meg told us that she wanted to take on a huge challenge in recognition of women who are facing adversity every day. “The challenge appealed to me because it is a group of ordinary women who are aiming to break records, and Breast Cancer Care and Walking for the Wounded are charities that are close to my heart. The team has a belief that everyone ‘crosses their own ocean’.”

The row has involved dedication, and immense physical and emotional strain. Meg explained: “I really think the hardest part is going to be sleep deprivation and not knowing how you are going to feel – apparently as soon as you can’t see land anymore some people freak out. We had to have so many checks on our body, like stress levels and sleep deprivation, so I am excited about pushing my body to the limit to see how far it can go.”

It is not too late to donate. Text DORIS to 70300 to donate £3 to support their fundraising efforts, or visit the Coxless Crew’s Charities page.