On 12 November, the University of Westminster recognised the achievements of highly respected figures in Politics, Health and Media, by awarding Honorary Doctorates at the November graduation ceremonies at London’s Royal Festival Hall. 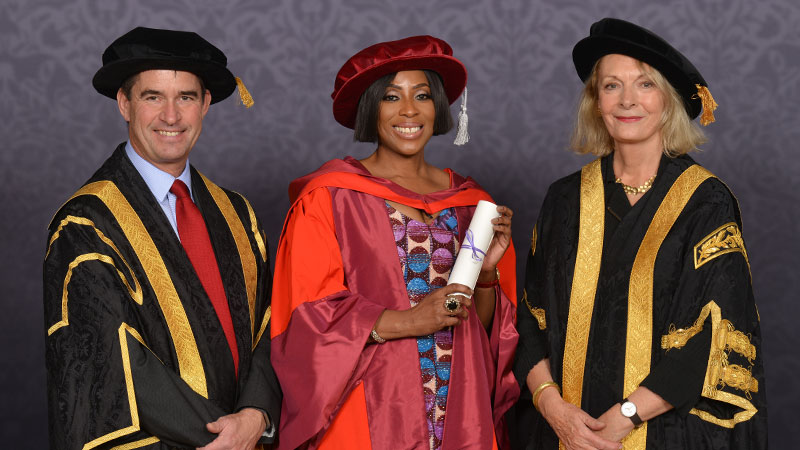 The College of Liberal Arts and Sciences named Colin Barrow CBE Honorary Doctor of Letters for his dedicated career, political activity and services to local government. For twelve years, he was Managing Director of E.D. & F. Man, bringing what are now known as hedge fund products to investors and private banks across the world.

In May 2002, he was elected to Westminster City Council to represent Hyde Park Ward, and from 2008 to 2012 has been Leader of the Council. His instruction enabled a substantial development programme to commence, which included the building and renewal of social housing, raising of educational standards in state schools and diverting troubled families away from crime, drug-use and anti-social behaviour. Colin has also encouraged diversity in education, with over 130 different languages now being spoken in Westminster City Council Schools. He was awarded a CBE in 2004 for services to local government.

The College also named Nigel Edwards Honorary Doctor of Science for his significant contribution to improving healthcare throughout the UK. Nigel has been Chief Executive at the Nuffield Trust since 2014, and prior to this was an expert advisor with KPMG’s Global Centre of Excellence for Health and Life Sciences, as well as being a Senior Fellow at The King’s Fund. He was Policy Director of the NHS Confederation for 11 years, accumulating a wealth of experience in health and social care. He is also an honorary visiting professor at the London School of Hygiene and Tropical Medicine, with a strong interest in new models of service delivery and key policy issues.

Media Personality and Entrepreneur Mo Abudu was named Honorary Doctor of Arts by the College of Design and Creative Digital Industries, for her influential services to broadcasting and enterprise in Nigeria. She is the founder and CEO of EbonyLife Media and creator of Africa’s first weekly pan-African talk show, ‘Moments with Mo’. She has spoken at Wharton School of Business, Judge School of Business at the University of Cambridge and Harvard University. She has also been widely recognised by international media, with Forbes magazine describing her as ‘Africa’s Most Successful Woman’ and the Hollywood Reporter listing her as one of the ’25 Most Powerful Women in Global Television’ in 2013 and 2017. Mo is an alumna of the University of Westminster, having completed her Master’s degree in Manpower Studies, now Human Resource Management MA, in 1993.