Leading independent film director and student on Westminster’s Entertainment Law LLM, Victor Buhler, held an exclusive screening of his new film, The Beautiful Game at the University of Westminster’s historic cinema on 1 March. 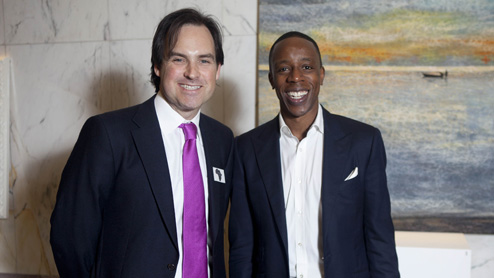 The Beautiful Game was produced in conjunction with and attended by Kojo Annan, former UN Secretary-General Kofi Annan’s son. Kofi Annan was unable to attend but sent a special video message for the evening.

Victor has been encouraged by the Centre of Law and Popular Culture at the University of Westminster Law School to host the evening and to combine his highly successful career as film director with his studies on the Entertainment Law LLM, which is currently the only course of its type in the UK.

The film portrays the inspirational power of soccer in modern-day Africa — a game that is helping to change the lives of individuals and communities across the continent for players, fans, young, old, with or without a disability, male and female.

Victor Buhler said: “In Africa, soccer brings 54 diverse countries into a common and passionate dialogue with tangible results. When an African country does well at a competition, its national GDP rises, its exports go up, crime decreases, and political divides narrow. We hope to show audiences a vision of an Africa that is too rarely seen: an Africa that is ambitious, resourceful and united. While there are challenging scenes in the film, our overall message is positive.”

The event supports one of the films key charity partners: the Right to Dream Academy in Ghana, an organisation that nurtures young underprivileged talent in Africa.

Archbishop Desmond Tutu: "Soccer isn't like a religion in Africa. It is bigger than religion"

Kofi Annan, former UN secretary-general, said: "Football has a uniting capacity for an Africa that has been divided in many ways. To have something that brings us together, unites us, across generations, across culture, is an exciting thing."