Ronnie Wood has extended his personal invitation to his Twitter followers to watch his documentary ‘Ronnie Wood: Somebody up there likes me’ at the University of Westminster’s historic Regent Street Cinema on 20 January. 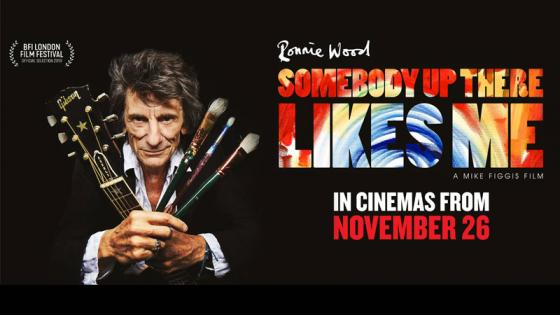 In a video that The Rolling Stones star posted on his personal Twitter feed @ronniewood, he starts off by wishing happy New Year to his fans, and he goes on to share that he has been asked many times where people can watch his documentary released in November. Wood details that the film will be screened at 8.30pm on 20 January at the Regent Street Cinema.

He said: “It’s a beautiful cinema, wonderful seating, so book now, you will enjoy it!”

The documentary, directed by Mike Figgis, explores the turbulent life and career of Wood, a legendary rock guitarist and long-time member of The Rolling Stones.

The film is “an intimate portrait of Wood today as an artist, musician and survivor. A man still at the cutting edge in his seventies, the film tells the story from his humble beginnings in north London, where his older brothers shaped the musical powerhouse he would become, to his unique career that has not only spanned over 50 years (so far) but also traversed some of the most influential musicians the world has ever known including The Birds, Jeff Beck, The New Barbarians, Rod Stewart, The Faces and, of course, The Rolling Stones.

“Ronnie guides us on a journey through his life – painting and performing, accompanied by the friends, musicians and artists who have been part of that life over the years including Damian Hirst, Mick Jagger, Keith Richards, Imelda May and Rod Stewart,” writes the film’s dedicated webpage.

As the birthplace of British Cinema, the new state-of-the-art auditorium at the Regent Street Cinema is open to the public as a unique arts venue for screenings, lectures, workshops and events, and has become a landmark for film in the heart of London’s West End.

As well as classic screenings, it also acts as a showcase for the University’s activities and successes in film, TV, moving image and photography enabling students at the University to be part of professional exhibition and industry-led events in the heart of central London.

Book your ticket on the Regent Street Cinema’s website.