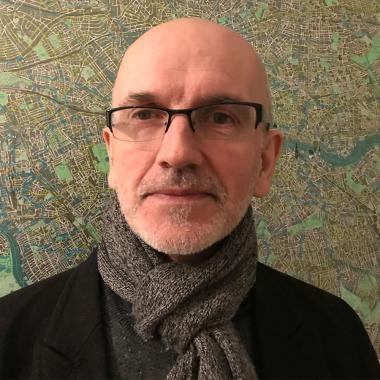 Jim McClellan began his career as a journalist writing for The Face and i-D, Arena. He went on to write for a variety of publications - Esquire, Elle, Wired, Adbusters, The Independent, The Sunday Times - and regularly appeared on TV and radio. He was a contributing editor at i-D and The Face. He was one of the first UK journalists to cover the internet, writing a regular column on the subject for The Observer and The Guardian. He wrote several books about the net for The Guardian and also worked on some of their early specialist websites.

Jim went on to work for the BBC, for their Creative R&D department, where his job was to help established producers and directors use the net and new media technology to develop new ideas and formats. He developed a number of projects whilst at the BBC, including 'Only Human', a drama pilot, which starred David Tennant. and 'Hot Links', a series for BBC 3. Jim was the BBC's Interactive Writer in Residence in 2004/2005.

Jim moved into academia in 2005 but continued to work for the BBC, doing the research for a one-off episode of BBC1’s ‘Imagine’ strand on Web 2.0, and (in 2009) editing ‘8’, a one-off newspaper devoted to collaborations between academic researchers and BBC online staff, and, in 2011, ‘Hacking the BBC’, an ebook covering the BBC’s Backstage project/open data work. Jim continues to work occasionally as a journalist - one of his old features (an interview with Matt Groening, about 'The Simpsons') was featured in the relaunch this year (2019) of The Face.

Jim leads the Journalism BA at Westminster and teaches classes at all levels of the degree. He leads the Year 1 module, Introduction to Journalism and the Year 2 module, Specialist Journalism 1 - where he teaches the Literary and Long Form Journalism pathway. In Year 3, he supervises Year 3 Individual Projects, teaches on the Technology and Video Games pathway on the Specialist Journalism 2 module and leads the Media Futures module, which focuses on media change, career skills and employability.